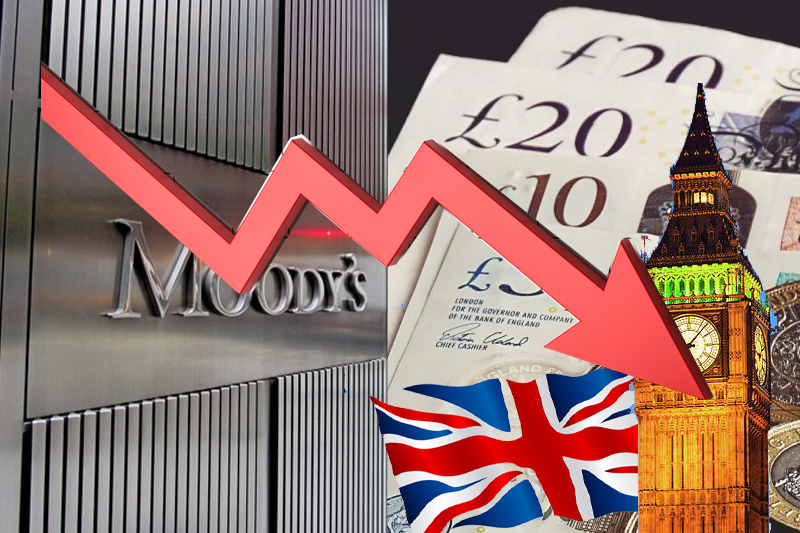 UK – Rating agency Moody’s downgraded the UK economic outlook to “negative” due to political instability and high inflation. Moody’s changed its outlook for the UK, which is an indicator of the likelihood of debt repayment, from “stable”.

Rating agencies essentially rate a country by the strength of its economy. Moody’s, along with another major rating agency Standard & Poor’s (S&P), have maintained their assessments of the UK’s credit rating. Rating agencies give governments (or large companies) an estimate of the likelihood that they will repay their debt.

The rating affects how much it costs governments to borrow money in international financial markets. In theory, a high credit score means a lower interest rate (and vice versa).

Moody’s said there were “risks to UK debt affordability” but maintained its rating at Aa3, the fourth-highest level on its scale.

Meanwhile, S&P kept the UK’s rating at AA – the third highest rating level – and maintained its previously revised outlook from stable to negative.

Reports released on Friday do not mean that the UK’s credit rating has been downgraded, but the negative outlook indicates that it could be downgraded at a later date. Other forecasts for countries can be positive or stable, and any forecast period usually lasts from 12 to 18 months.

Moody’s said two factors were behind its decision to change the UK’s economic outlook. It states that the first was “increased risk to the UK’s creditworthiness due to increased unpredictability in political decision-making amid an unstable domestic political environment”.

Moody’s said this called into question “the UK’s ability to handle the shock of weaker growth prospects and high inflation”.

The ratings agency said it viewed the government’s mini-budget, the repeal of much of its policy, and the change of prime minister as “a continuing reflection of the weakening in fiscal policy predictability seen in previous years.” Moody’s assessment came after the cost of government borrowing soared after a mini-budget in September, when investors were spooked by then Chancellor Kwasi Kwarteng, who promised huge tax cuts without saying how the government would pay for them.