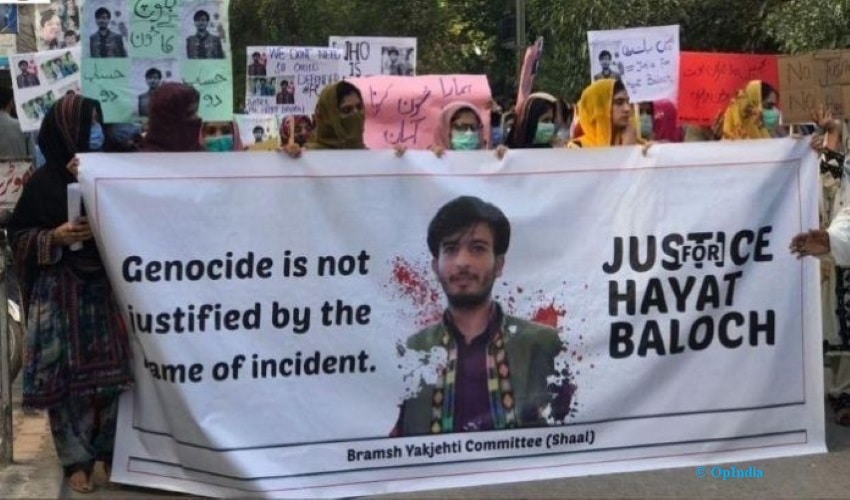 Frontier Corps (FC) of Pakistan killed Baloch in Turbat town of Balochistan. Protests of unprecedented proportion have since sparked in people who have gathered in large numbers across Balochistan and various other parts of Pakistan. The killing is said to be a revenge of attack on Pakistan soldiers by Baloch insurgents in Aapsar area of Turbat.

Protest in front of #Karachi Press Club against the brutal murder of Hayat Baloch by Pakistan armed forces:
"Facism will not succeed & Martyrs will be always remembered by the nation". #Balochistan.#JusticeForHayatBaloch @UN @hrw @amnesty pic.twitter.com/7UzKC8yjG1

BHRC said in a released statement, “On August 13, the Frontier Corps soldiers came under attack by Baloch insurgents in Aapsar area of Turbat. The retaliating FC soldiers when failed to locate the attackers, they conveniently seized Hayat Mirza from a nearby date farm, where he had gone to assist his parents with farming.”

Sources reveal that Hayat was dragged forcibly by FC soldiers to roadside from a farm. He was then pushed to the ground, using his mother’s scarf was blindfolded, and his hands were tied up. No chance to plead his innocence was given to Hayat, and neither was he given any reason for his capturing. He was then severely beaten and killed after being shot multiple times. Hayat’s parents were made to watch all the ordeal and killing of their ill-fated son.

We in the BHRC see Hayat’s murder as a consequence of Pakistan’s colonial rule in Balochistan, which has consistently inspired and shaped the policies of its military establishment against the Baloch people, one of which is the physical elimination of the cream of Baloch society that with time has intensified as a result of the inaction and silence of the state judiciary, and the concerned international human rights bodies.

The statement added, “Balochistan is suffering a severe humanitarian crisis, having been in the throes of conflict for the past two decades, and a large part of its young population has been the victim of enforced disappearances and extrajudicial killings. Thousands of them have fled to different countries in recent years.”

The BHRC has stressed that it is high time for other countries and international organizations, including UN Human Rights Council to intervene and stand for human rights of people of Balochistan.

Why Greece Is Merciless Is Expelling Migrants?

works good, thanks a lot