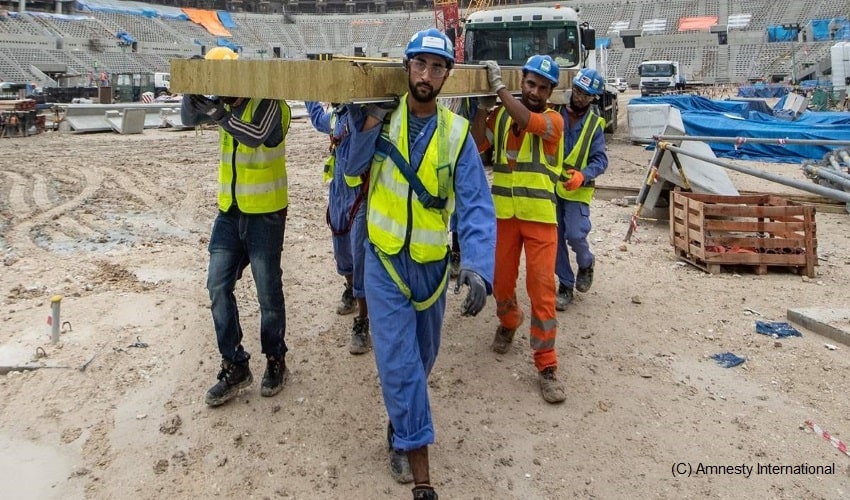 Hundreds of migrant workers employed in the construction of a stadium for the World Cup strived for up to seven months without pay.

Hundreds of migrant workers employed in the construction of a stadium for the World Cup strived for up to seven months without pay. Numerous domestic workers continue to work around 16 hours a day, with no day off, describing verbal and physical abuse. These are just two examples of the unfortunately still current problem concerning the conditions of workers in Qatar, abuses and exploitation for which employers have not been called to answer. Amnesty International sections of over 20 countries, including Switzerland, are therefore calling on the State of Qatar to put an end to the impunity of abusive employers by strengthening the implementation of promised labor reforms.

As part of organizing the 2022 Football World Cup, Qatar had to re-examine its policies on the rights of migrant workers. Two years after kick-off, Amnesty notes with satisfaction the introduction of a series of reforms, including a law regulating working hours, the introduction of a labor court for disputes, a fund for payment of unpaid wages, and the definition of a minimum wage. Qatar has also abolished some laws requiring migrant workers to seek permission from their employer to change jobs or leave the emirate. And it ratified two key international human rights treaties while not recognizing the right to join a trade union. If these reforms are implemented properly and comprehensively, they can help eliminate the most problematic aspects. But as for now, improvements have remained on paper and lack of implementation entirely.

Migrant workers are making #Qatar’s dream of hosting the FIFA #WorldCup 2022 a reality.#Qatar’s made key reforms but still has much to do to ensure all migrant workers are free from exploitation before kick-off.

Positive reforms have too often been undermined by weak implementation and an unwillingness to hold abusive employers to account. Inspection systems are inadequate to detect abuse, and it remains challenging for workers to lodge complaints without risking their income and legal status. Qatar needs to do much more to ensure legislation has a tangible impact on people’s lives.” Steve Cockburn, Head of Economic and Social Justice at Amnesty International, said. He added that holding perpetrators to account is paramount to end the cycle of abuse.

Qatar must show abusive employers that their actions have consequences, by monitoring their adherence to laws and penalizing employers who break them. It’s time for Qatar to send a clear signal that labour abuses will not be tolerated.

Amnesty International offices in more than 20 countries are also writing to their national football organizations urging them to play an active role in safeguarding the rights of migrant workers in Doha. A statement from the international organization for the defense of human rights called football associations to make sure that FIFA use its voice, privately and publicly, in urging the Qatar government to fulfil its programme of labour reforms before the World Cup kicks off. The mistreatment of workers in Qatar is leading more and more NGOs and human rights activists to ask FIFA to rethink the World Cup venue, also in light of the regime’s poor management of the coronavirus emergency.