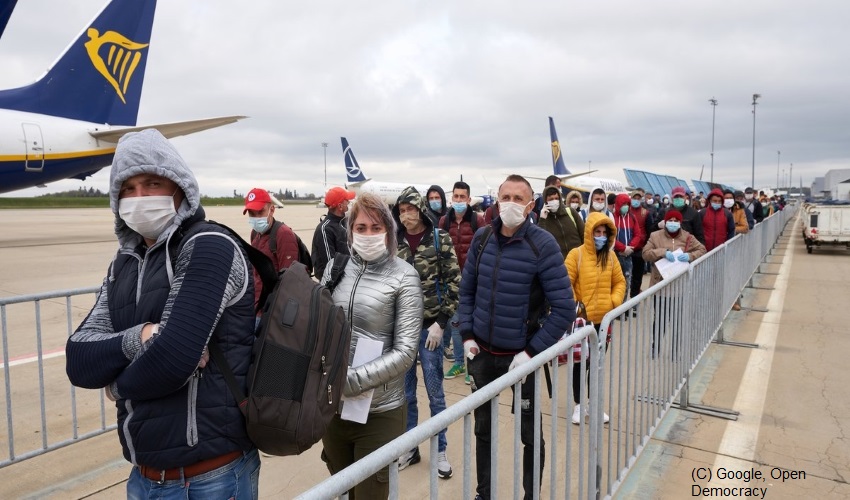 According to a London based think-tank, foreign-born labour has been forced to return to their own countries, as jobs have got derailed miserably since November 2020.

Britain has reported a huge hit to its labour market post the coronavirus lockdown has opened up. According to a London based think-tank, foreign-born labour has been forced to return to their own countries, as jobs have got derailed miserably since November 2020.

The drop has been more in London than anywhere else in United Kingdom.  Foreign-born migrants have accounted for a particularly big part of the drop, especially, in London, where 35percent of foreign-born UK residents lived in 2019. It is estimated that more than 800,000 foreign nationals have moved out of London.

Has the #Covid_19 pandemic led to a mass exodus of migrant workers?

Somehow, UK is thankful for this because this reduces the pressure on the British resources that have been already stretched due to many retail outlets closing down shop post the pandemic mayhem.

Nevertheless, the overall job situation is very bad. One in seven UK firms has little confidence it will be trading in three months, with a third of hospitality firms fearing collapse.

Additionally, official figures show that far less people have applied and got through in visa applications to the UK. In addition, the general number of applications have also dropped significantly. In issuance of Certificate of Sponsorship (COS), the official figures sees a dramatic drop. While the Home Office has issued a significant number of such certificates, the actual number of them used is very low. The 2020 earmarked 20,700 certificates that are allocated monthly seen a huge number of unclaimed CoS. There is a marked lower migrant movement into the UK currently.

Hey there outstanding website! Does running a blog similar to this require a great deal of work?
I’ve absolutely no expertise in computer programming however I had been hoping to start my own blog in the near future.
Anyways, should you have any ideas or tips for new blog owners please share.
I know this is off subject nevertheless I just wanted to ask.