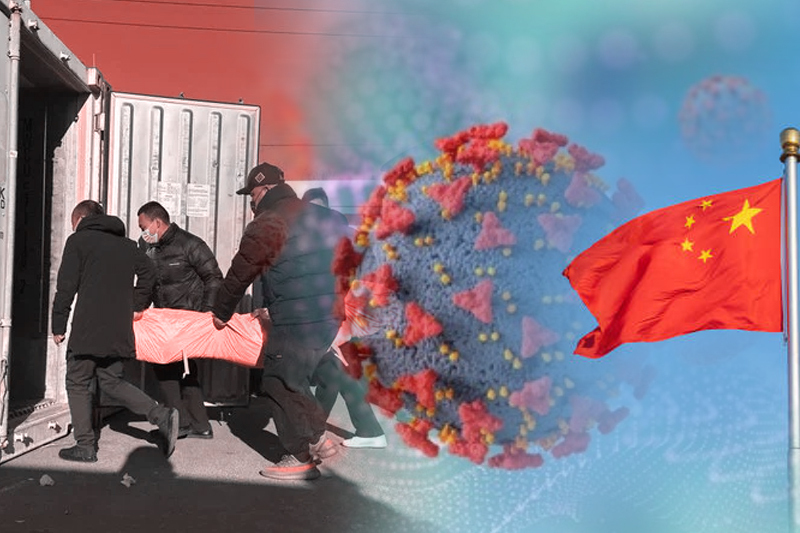 On Friday evening, when employees in complete safety suites wheeled out coffins one by one, scores of people were dressed up against the chilly weather outside a funeral home in eastern Beijing with parkas and hats.

A family member walked up to the casket to look at the body when a worker with a clipboard screamed out the name of the deceased. The Associated Press was informed by one of the relatives that their loved one had COVID-19.

Beijing is now reporting deaths associated with the coronavirus after weeks of China not reporting any fatalities, despite the country experiencing an increase in cases.

This increase occurs as a result of the government substantially loosening some of the harshest COVID-19 containment measures in the world last week. The government announced on Wednesday that it would stop disclosing asymptomatic COVID-19 cases since it is now difficult to keep track of them since bulk testing is no longer necessary.

It was unknown how quickly the virus was spreading because of the break in reporting. Numerous infections are suspected based on social media posts, business closures, and other anecdotal information.

According to a relative of one of the deceased, Dongjiao and another funeral home had been chosen by the health officials to cremate people who pass away after testing positive. The elderly relative, according to the woman, fell unwell in early December, tested positive, and passed away early on Friday at an emergency room.

She added that there weren’t enough nurses to care for all of the patients in the emergency room who had tested positive for COVID-19. The woman wished to remain anonymous out of concern for punishment.

An AP reporter witnessed the removal of around a dozen remains from the Dongjiao funeral home over the course of an hour.

One of those individuals indicated that a group of around six persons inside recalled how another victim had fought to breathe that morning before passing away, and the death certificate had listed “pneumonia” as the cause of death despite a positive COVID-19 test. For fear of retaliation, the interviewees requested anonymity.

There has been a noticeable rise in visitors recently, according to three employees at businesses in the building that contains the funeral home. One estimated that daily cremations had increased from a few dozen to roughly 150 dead.

While another stated there are often more fatalities when winter arrives, one colleague blamed it on the coronavirus.

Since December 4, China has not recorded a COVID-19-related death.

Compared to 1.1 million deaths in the US, China’s official death toll is still low at 5,235. However, public health professionals advise against direct comparisons between these numbers.

Chinese health officials only include individuals who passed away as a direct result of COVID-19; they do not include those whose underlying diseases were made worse by the virus. According to regulations in many other nations, any death when the coronavirus is a cause or contributor must be classified as a COVID-19-related death.

According to experts, this has long been standard procedure in China, but occasionally it has been questioned whether officials intentionally tried to downplay the numbers.

The Chinese Cabinet issued an order for rural areas to get ready for the return of migrant workers during the holiday season in an effort to avoid a significant spike in COVID-19 cases in places with few medical services.

The recommendations did not mention the prospect of isolation or quarantines; instead, they stated that returnees must wear masks, avoid contact with elderly people, and have their activities monitored by local committees.

Around China’s winter holidays, when tens of millions board trains, buses, and aeroplanes for what may be their last trip home all year, there are concerns that the number of cases will increase.

The Lunar New Year is on January 22, but migrants typically start returning home two weeks or more beforehand. To help spread out the travel crunch and lessen the possibility of a larger epidemic, some Chinese colleges say they will permit students to conclude the semester from home.

About 500 million of China’s 1.4 billion inhabitants reside in smaller towns and rural areas, where medical facilities fall considerably behind those of major cities like Beijing and Shanghai. There are 17,000 county-level hospitals in rural areas, many of which don’t even have an ICU bed, along with 35,000 township health facilities and 599,000 village clinics.

To treat persons who have COVID-19 symptoms, China has pushed to increase the number of fever clinics in rural areas. According to state media on Friday, there are currently 19,400 such clinics or consulting rooms operating in towns and regions around the nation.

Fever clinics will be present in roughly 90% of township-level health centres by March 2023, according to Nie Chunlei, director of primary health at the National Health Commission, who made the announcement on Thursday.

Nie also advocated stockpiling of medications and antigen test kits, many of which have become rare even in large cities. “This would effectively boost the capacity of primary-level healthcare institutions to receive patients with fever,” added Nie.