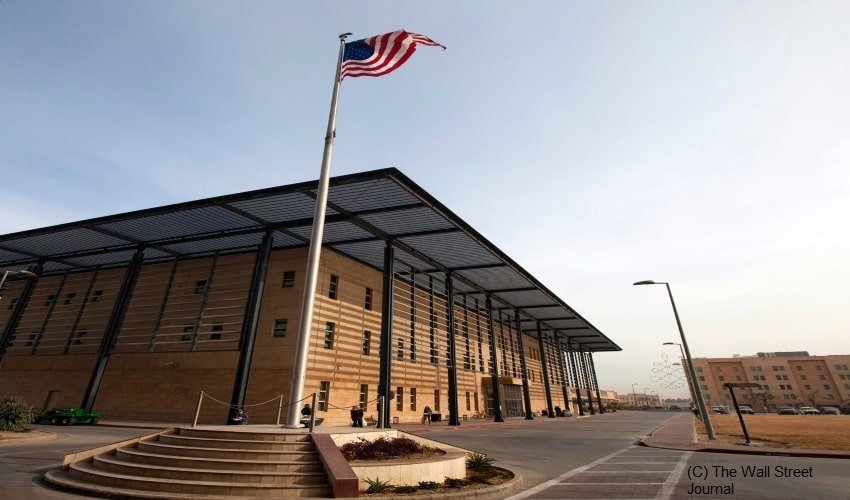 US government decided to reduce the number of staff members working in its Embassy in Baghdad as the tensions rose between the two nations.

US government decided to reduce the number of staff members working in its Embassy in Baghdad as the tensions rose between the two nations. Washington added that the decision was temporary in nature and was taken due to security concerns. In a video statement shared on the US Embassy’s Facebook page on Thursday evening, US Ambassador Mathew Tueller assured that reduction in staff would not impact the US mission’s work in the country.

Tueller said that he would continue to perform his duties as part of the Iraq embassy for the “foreseeable future”.

I will do so with the support of a core team of American diplomats and US advisors to the Iraqi military.

US took the decision to limit the number of its staff members in Baghdad due to increasing tensions with Iran and its allies. But US embassy did nor officially give any reasons for the move. Over the last year, US-Iran relations have reached its lowest since the killing of Iranian top general, Qassim Soleimani, and senior Iraqi militia leaders by US airstrike near Baghdad”s airport in January. As Iran moves closer to the first anniversary of that strike, US advisors anticipate a retaliatory attack.

A U.S. official, however, said the decision stems from concern about a possible Iranian retaliatory strike on the first anniversary of the U.S. airstrike that killed Iran’s top general, Qassim Soleimani #Iraq #Baghdad https://t.co/Ajtx2S87fV

Besides, the attack was followed by a non-binding resolution passed by Iraqi lawmakers in  the parliament demanding expulsion of foreign forces from its soil. US waited for the heat to fizzle out on its own but as January has been nearing Iraqi Prime Minister Mustafa al-Kadhimi started facing calls from Iran-aligned groups to push out US forces.

The ties between Washington and Tehran reached a new low after last week’s killing wherein Iran lost its top nuclear scientist, Mohsen Fakhrizadeh. As per internal sources Iran believed that Fakhrizadeh was assassinated by US closest ally, Israel, who the Islamic Republic’s intelligence said has been planning to do it for a decade.

As an impulsive move to the recent assassination of its nuclear scientist Iranian hardline leaders threatened to take revenge along with increasing the Islamic Republic’s nuclear enrichment capability. Iranian Parliament though stood visible divided over the issue among hardliners and moderate centrists. The proposed bill got approved with hardliners supporting to end international inspection of its nuclear sites, if US did not lift the sanctions.

Besides withdrawing embassy staff, US has been taking back its troops from Iraq and Afghanistan as per the commitment given by Trump administration. Washington would be withdrawing about 3,000 to 2,500 soldiers by mid-January, before Donald Trump exits Presidential office. In September, the Trump administration also warned Iraqi government that US would shut down its embassy in Baghdad if the host country did not take action against the offensives and other attacks being launched at US embassy, by Iranian-backed militias and allied groups.