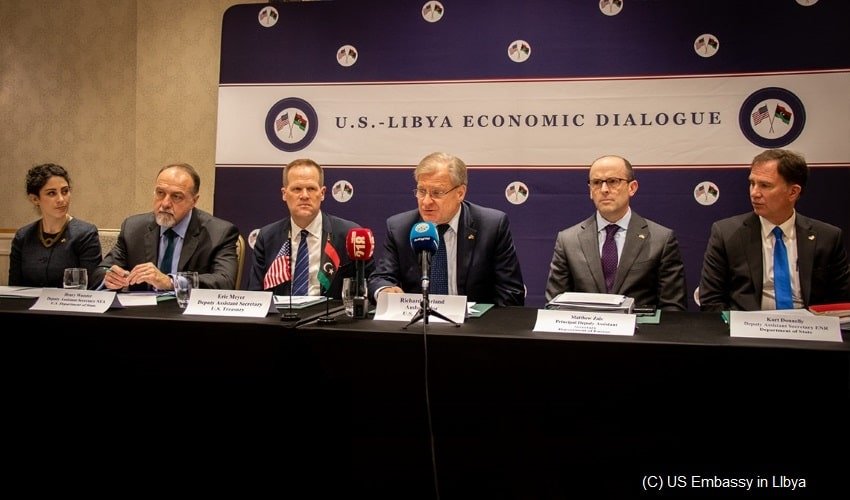 During the talks with the Libyan Minister of Finance, the diplomatic reiterated U.S. support for current arrangements, whereby oil and gas revenues remain frozen under apolitical management as a temporary and exceptional measure

The Ambassador of the United States of America in Libya, Richard Norland, met on December 4 the Libyan Finance Minister, Faraj Bomtari, a statement from the Embassy revealed today. During the meeting, Norland voiced support for the UN Support Mission in Libya’s (UNSMIL) call to convene senior Libyan technocrats and policymakers for a much-needed discussion on the economic challenges that Libya is experiencing. The note affirms that, as Libya grapples with challenges related to the exchange rate and budget process, Ambassador Richard Norland said it’s necessary to protect Libya’s resources for the benefit of all Libyans. And any actors who would seek to divert state resources for narrow individual or partisan gain should be held accountable, the statement added.

U.S. Embassy support for the NOC’s mandate on behalf of Libyans @NOC_Libya #Libyahttps://t.co/sefoWE42Pp

During the talks with the Libyan Minister of Finance, the diplomatic reiterated U.S. support for current arrangements, whereby oil and gas revenues remain frozen under apolitical management as a temporary and exceptional measure. Also, he urged that the conference proposed by UNSMIL occurs “as soon as possible” to develop an agreement on an interim solution pending final decisions in the context of the UN-facilitated Libyan Political Dialogue Forum (LPDF). Norland highlighted the important role that Libya’s private sector must play in diversifying the country’s economy, stressing that the measures discussed yesterday are also fundamental to developing a business climate that will attract American and other foreign investment for the benefit of all Libyan people.

The Embassy announcement reveals that during the meeting, the U.S. Agency for International Development (USAID) and the Ministry of Finance signed a letter of cooperation that outlines ongoing U.S. support as Libyan authorities work to promote fiscal transparency and improve public financial management in the North-African country. The U.S. Ambassador to Libya stressed that the robust partnership between USAID and the Ministry of Finance reflects the U.S. engagement to helping Libyan authorities earn the trust and confidence of the Libyan people that state resources are managed transparently and in the public interest. The envoy of Washington and the Minister also discussed ways in which USAID programs could support government efforts to empower municipalities to better play a role in delivering services to the Libyans throughout the country, including the most marginalized southern region.

During her opening statement of the LPDF second virtual round, the United Nation Special Representative of the Secretary General (SRSG) in Libya, Stephanie Williams, warned about the declining socioeconomic conditions in the country and the fact that UN expect in one-month time, exactly in January 2021, there will be 1.3 million Libyans in need of humanitarian assistance. “There is a sharp decline in the purchasing power of the Libyan Dinar.” She argued, adding that the liquidity crisis has fully returned. “There is a shortage of cash in circulation,” Williams pointed out. Libyan people are experiencing a terrible electricity crisis as result of the prolonged conflict, summed to corruption and the mis-governance, all over the country, in the West and in the East. Today, only 13 of 27 powerplants are functioning. According to the UN, one billion US dollars is needed immediately to be invested in the electrical infrastructure to avoid a complete collapse of the electrical grid in Libya.