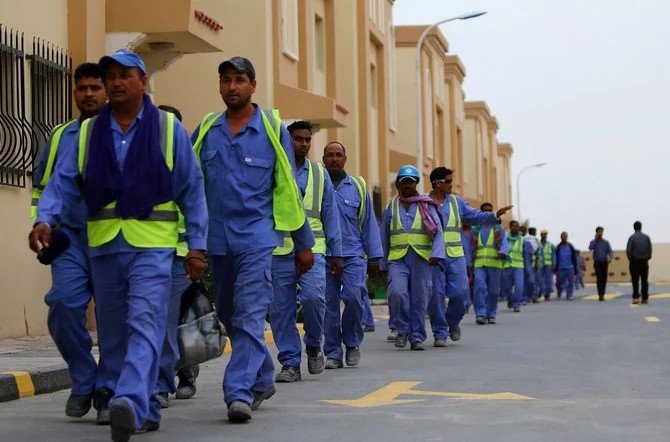 The Qatari government continues to uphold its position in denying the violations that foreign workers, especially those who work in the 2022 World Cup facilities, are exposed to, but the spread of the Corona virus has exposed a tragic reality experienced by workers in sports facilities.

According to an Amnesty International report, Doha forcibly deported dozens of foreign workers after their detention after making them believe that they will get tested for coronavirus as part of a preventive measure.

The organization confirmed that the workers were taken to an overcrowded prison where they stayed for days before forcibly deporting them without salaries or luggage to their respective countries .
Rather than taking real effective measures to protect workers and respect the most basic rights guaranteed by international legislation, especially the right to health, Doha still exercises the same policy in covering abuses.

Observers believe that Qatar took advantage of the Corona virus crisis to get rid of hundreds of workers with the end of the works of the World Cup facilities without giving them their salaries.

Qatari denial appears in the government’s response to the Amnesty report, where it said that dozens of workers who were arrested and deported practiced illegal activities, but such pretexts did not persuade those organizations, foreign workers, or even Qataris themselves, who expressed their annoyance with their country’s policy through blogs and hashtags on social media pages.

The Qatari authorities are only interested in completing the World Cup facilities at the expense of workers’ health ,lives and even at the expense of the health of their citizens, but with the first cases of the Corona virus being recorded, workers in the World Cup stadiums building workshops showed real concerns about the consequences of the Qatari policy’s failure to contain the epidemic.

Qatar has announced that 3,711 people have been infected with the Corona virus and 7 of them have died since March 6th, but this is the first time that it has revealed positive tests at the World Cup sites.

Qatar has a proven record of labor rights violations, with international reports reporting that 34 migrants have died since the World Cup facilities began operating six years ago, 31 were considered unrelated to work.
The Qatari authorities claim that most deaths are due to natural causes, and heart problems, blood pressure, and respiratory system to avoid responsibility.

International organizations expressed their concern about the spread of the deadly virus among workers, with a state of neglect and sedation by the Doha authorities, where it was noted that workers are crowded in buses carrying them to work sites without taking the necessary health precautions, which constitutes a threat to their lives.

According to these reports and investigations, workers go every day to “be executed”. The nature of work prevents social distance, which means that there is a high risk of transmission between workers, and the most dangerous thing is that infection can spread from them to the rest of the population, both Qatari and expatriate.