Why Korea Should Absorb Stranded Migrants Workers Into Needing Sectors 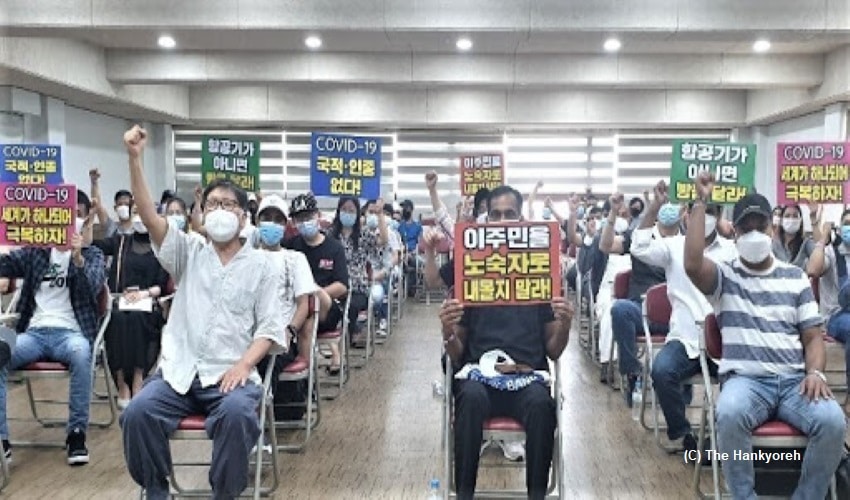 Jobless migrant workers in South Korea are awaiting some kind of help to get back home.

Jobless migrant workers in South Korea are awaiting some kind of help to get back home. With no flights available, they remain stranded in the foreign country due to the Covid-19 created havoc.

A demonstration in the city saw many migrant workers protesting against the mistreatment, demanding the government for some kind of a relief fund for their survival, while they wait to find a way to get back home.

Since the lockdown started and manufacturing stopped, many employed with factories have been without work.  Most of these comprise migrant workers. As many as 8,800 migrant workers have found themselves unable to return home after the end of their sojourns because of flight suspensions.

‘No jobs, no flights home’: Migrant workers stranded in #SouthKoreahttps://t.co/uUmdkeKi4D

There are limited numbers of aircraft seats; and social distancing protocol asks for minimal numbers to be sent on flights. While foreign embassies in Seoul are scrambling to arrange charter flights to repatriate their citizens, it has been confirmed that priority is being given to urgent cases due to the limited number of seats. From April to August this year, merely 3,360 foreign nationals have been airlifted from Korea on 62 occasions, according to the Justice Ministry.

This is a very small number compared to the magnitude of migrant workers stuck in so many months without work, or aid. There is the added problem of not being able to send money home either, making survival back home very difficult for the families of such migrant workers.

It has further been reported that not all workers are getting medical aid and PPE for their own safety. Under a rule set by the government, at the time of outbreak, only those who had subscribed to the national health insurance plan were eligible to buy masks. This has currently left out about half of the foreign population. Foreigners were also excluded from the government’s cash relief programs unless they were married to Koreans. Ironically, while these migrant workers are not being sent back home, they are also not getting absorbed into any kind of employment either. Strangely, Korean employers suffering from labor shortages are calling on the government to bring in more foreign workers. Political analysts believe the only way to handle the imbalance is to extend the work permits of these migrant workers and help them get absorbed in various manpower needing jobs in agriculture and fishing sector to start with, instead of attracting more employment from abroad.