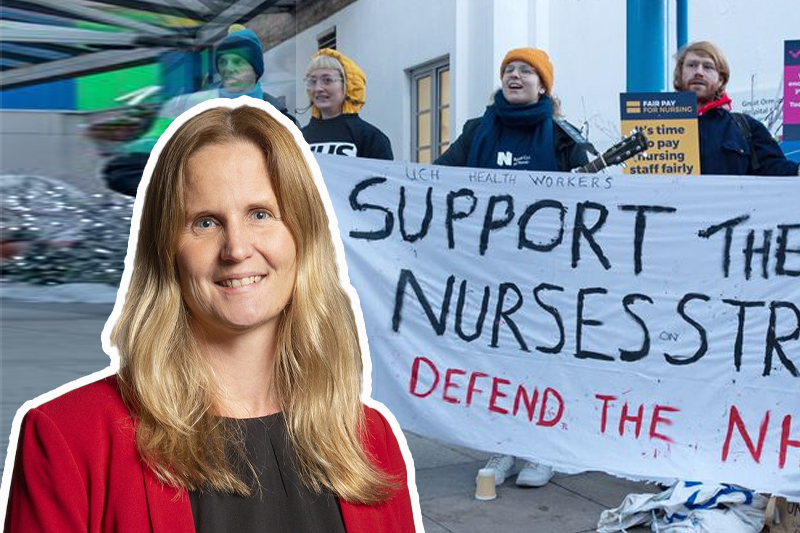 A Welsh Labour MP plans to join a nurses’ strike picket line in Wales next week, despite the fact that health is a devolved issue for the Welsh Labour Government.

She stated that nurses participating in strike action today and on December 20 were striking not only for pay but also to safeguard the NHS.

Beth Winter stated in a letter to UK Chancellor Jeremy Hunt, “It shames us all that there are nurses living in poverty in this country” and that nurses are on strike “to safeguard patients from receiving dangerous care in an understaffed and underfunded health service.”

The letter cited Mark Drakeford, who had previously stated that he believed public sector employees should receive wage increases that “at least reflect inflation,” but that “we are completely constrained by the decisions made… in Westminster.”

Beth Winter remarked, “From my observations, nurses are not greedy individuals. They are striking to defend patients and the NHS following 12 years of austerity measures imposed by the Conservative government of the United Kingdom.”

She continued, “Wales has endured years of underfunding and wants an equitable funding arrangement based on its requirements from the UK government. Our nurses have more than earned an inflation-proofed wage raise over the past few years, and the UK government has the authority and resources to make it happen. This week, I’ll be on the picket line with the nurses.”

Tuesday in the Senedd, the First Minister of Wales stated that diverting funds from the NHS to pay nurses was not in its best interest.

He was reacting to Plaid Cymru leader Adam Price, who stated that it was “shocking” that Labour at Westminster was criticizing the Conservatives for not talking to unions about nurses’ pay while doing the same in Wales.

Mark Drakeford said, “The gap between us is not philosophical at all; it’s merely practical.”

“He wants to steal £120 million from activities the NHS in Wales is obligated to carry out and use it to pay people. This is a pragmatic decision; we had to make a different decision due to the immense difficulties the NHS encounters daily.”

“Now, I reiterate what I just said: all problems are resolved by negotiation. I ask the Westminster Government to negotiate in a way that allows us in Wales to achieve what we would like to do, which is to ensure that the people who provide those front-line services, which we rely on constantly, are adequately compensated for their work.”

“Magical solutions have been proposed on both sides of the chamber this afternoon, claiming that Wales is in a position to accomplish something exclusive that is unavailable beyond the border.”

Today, Eluned Morgan, the Minister for Health and Social Services, stated, “We think that all public sector employees should be compensated adequately for their crucial work.”

“Today’s strikes will certainly have a severe impact on NHS services. However, we acknowledge the strength of feeling reflected in the tough decision to vote for industrial action.”

“Although we were unable to avert industrial action this week, all parties have agreed to continue communicating and working together. We will continue to collaborate with trade unions, companies, and the government to achieve the greatest possible outcomes for employees within our limited budget.”

Midwives and maternity support personnel in Wales are the most recent NHS employees to vote for strike action over salary.

As the results of a ballot were released on Tuesday, members of the Royal College of Midwives (RCM) voted by a margin of more than 9-1 in favor of strikes and other kinds of industrial action, with a turnout of 55.39 percent.

Julie Richards, director for Wales at the Royal College of Midwives, stated that midwives and maternity support workers (MSWs) in Wales were “exhausted,” adding, “The disappointing and unacceptable 4% salary offer” merely reinforced their emotions of being disregarded and devalued.

“Taking industrial action is always a last choice, and our members’ decision today demonstrates how desperate they are for policymakers to listen.”

In their first-ever vote on wages, physiotherapists in Wales also voted decisively in favor of a strike, the results of which were released yesterday.