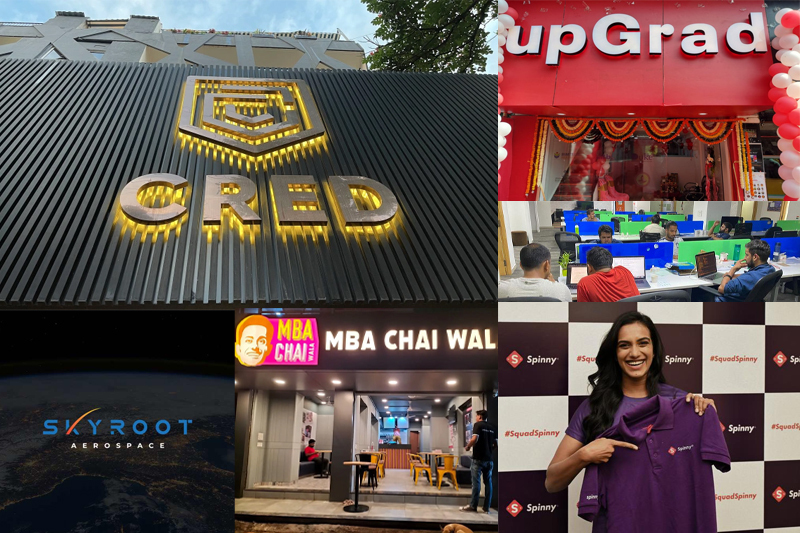 The previous year was filled with ups and downs, particularly because of the global COVID-19 pandemic. In India, a large number of formidable businesspeople have pursued commercial opportunities and tested their ideas. Some of them have failed, while others have flourished. India encourages the creation of startups due to the availability of low-cost trained labor, funding from national and international investors, and expansion prospects.

According to Financial Express, in 2021, startup funding reached a new peak. In addition to large venture capitalists, institutional investors and pension funds are participating in a large number of new online enterprises. During the period of January to March 2021, investors poured approximately $4.4 billion into Indian startups, which is a 26% increase over the same period last year.

The best startup in India is CRED, which is a member-based credit card rewards app and financial services organization that was established in 2018. It has acquired recognition due to the funny advertisements that it publishes.

TechCrunch claims that CRED is the youngest Indian firm to be valued at approximately $2.2 billion. This two-year-old firm has more than six million clients and accounts for around 22 percent of all credit card holders. According to the firm’s founder and chief executive officer, Kunal Shah, the company is targeting wealthy clients and has become one of the most discussed startups.

Very few organizations focus on a high-end customer base and maintain robust growth over time. CRED also intends to offer a function that will allow over a thousand retailers to accept CRED currency. The startup also intends to operate an online store. It is evident that the firm intends to do much more than provide clients with incentive coins.

One of the top startups in India is upGrad; it is a platform that offers professionals and college students the chance to further their education while they are employed. The platform works in collaboration with a number of colleges in India and throughout the world.

The educational technology firm, which began operations in 2015, has just completed a funding round of $210 million. Despite this significant increase in funding, the company continues to expand by 100% year over year.

Groww is an investment platform that enables its clients to invest in stocks, ETFs, mutual funds, IPOs, and more. The platform is compatible with both mobile apps and the web. This top startup was established in 2016 by four former Flipkart workers who observed the difficulty of investing in India. This realization prompted the founding of Groww, which has enrolled more than 15 million users to date.

According to Groww, over sixty percent of the company is owned by Indian cities that have never invested before. According to one of the company’s founders, Lalit Keshre, Groww is utilized throughout India, not just in major cities. Young, working-class individuals from all of the nation’s main cities are interested in investing their hard-earned money.

In 2021, the company raised $83 million and joined the Unicorn club. This company is excited to invest this sum in new products, the recruitment of new talent, and the development of investor education platforms.

One of the best startups in India is Zepto!

It was established in 2021 and guarantees delivery of orders within 10 minutes. The company was started by two individuals who were only 19 years old at the time.

Its most recent investment round, which took place in May, was significant in bringing it closer to achieving unicorn status; its current valuation is $900 million. It provides a comprehensive assortment of foodstuffs, dairy products, and other goods, among others.

Skyroot Aerospace, one of the top startups in India, was established in 2018 by engineers and scientists who had previously worked with ISRO. The company develops technology that provides rapid, dependable, and affordable access to space.

The rockets in the Vikram series, which are currently being developed by the aerospace technology corporation, will assist in the launch of smaller satellites into orbit.

MBA Chai Wala is one of the best startups in India in 2022.

The odd history of the person who started this chain of tea shops that serves food also contributed to the company’s meteoric rise to fame. MBA Chai Wala was established in 2016 by a man who had previously worked as a waitress at McDonald’s.

He is the son of a farmer and aspired to earn his MBA. MBA Chai Wala expanded from a single “thela” location to several franchise locations in over one hundred cities in India.

Spinny, included in the list of the best startups in 2022, is a marketplace for pre-owned cars that was established in 2015. The company’s primary mission is to make the process of purchasing and selling cars more open and streamlined.

As a result of its growth, the company plans to recruit anywhere from 1,500 to 2,500 new employees from tier 2 and tier 3 cities.

This content-to-commerce platform, which was established in 2017, promotes and supports the sales of a variety of cruelty-free and sustainable beauty and personal care businesses by utilizing social media.

The word “Good” in the name of the brand draws attention to the fact that it prioritizes inclusive beauty and natural beauty products.

GrowthSchool, one of the top startups in India, was established in 2021 with the intention of assisting its students in developing both personally and professionally. Mentors on the platform include people like pastry chef Pooja Dhingra, co-founder of Nearbuy Ankur Warikoo, and co-founder of All Things Small Devaiah Bopanna.

These experts help students progress their careers by participating in debates, conversations, and live question-and-answer sessions.

This all-electric cab service was established in 2019, and it currently operates a fleet of more than 2,000 electric vehicles. As one of the best startups in India, BluSmart provides customers with a mode of transportation that is more environmentally friendly and sustainable.

They just recently began offering hourly rentals, which make it possible for customers to keep the cab while they run errands.