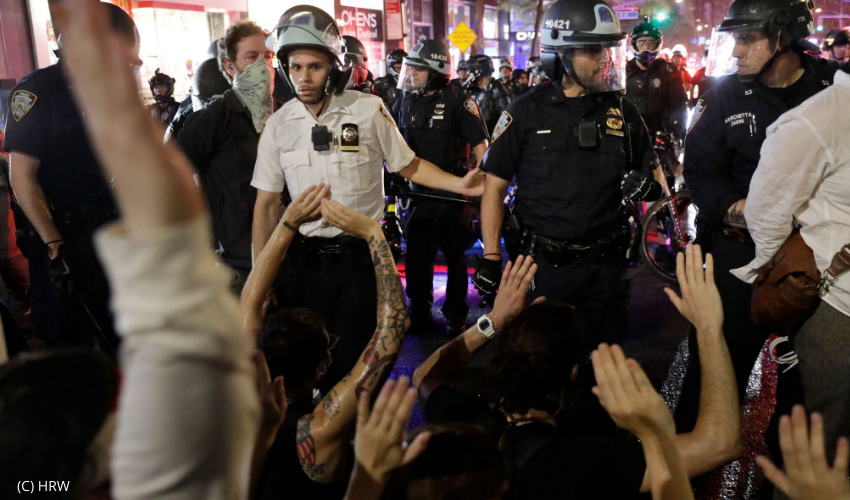 Protests across the United States following death of George Floyd

Protests across the United States following death of George Floyd in police custody are basically against all the police misconduct being taken for granted since years together. Brutal violence, excessive force use, unprovoked beatings, and random arrests.

Across the country many journalists, silent protestors and random people have been arrested for minor issues like, crossing the curfew time, blocking traffic and failure to disperse.

Many protestors in New York were detained for hours in crowded cells with no social distancing provision, and no masks or hand sanitizer provided. Some protestors reported that the police officials tore their masks and did not provide them with a new one while in detention. Many police officers were seen without a mask themselves, putting everyone at the danger for coronavirus infection.

Keith Boykin, a journalist in New York was arrested when he was filming the protestors who were marching towards West Side Highway in Manhattan on May 30 at around 3:30 pm EST. His mask was pulled off and his hands tied back with zip tie. After waiting for hours in a hot van he was shifted to 1 Police Plaza, the New York City Police Department’s Headquarters. Boykin said that he was put in a cell with 34 other people, none of them was wearing a mask and there was no hand sanitizer provided either.

“I had no opportunity to make a phone call, no one questioned me, no one read me my rights, and they were exposing me to coronavirus. It shouldn’t be this way in America,” said Boykin who was released 6 hours later.

In another incident in Bronx on June 4, the police force used the “kettling technique” on protestors where they surrounded them from everywhere with no escape route before beginning of curfew at 8 pm. After that they went on a rampage on protestors “wailing their batons” and “indiscriminately pepper spraying people in an enclosed space.” Protestors were handcuffed and zip tied and made to sit on streets waiting for transport to detention. Many protestors were badly injured with bleeding heads. Police delayed calling EMT until one woman started convulsing post head trauma.

All these incidents put a grave question mark on human rights and strongly indicate violation of basic human rights in the name of “peace keeping”. In fact there must be no mass arrests happening when people are exercising their fundamental right of freedom of speech and expression.

US sanctions $5.5 million aid to Nepal to tackle impacts of Covid crisis, says US embassy to Nepal

[…] George Floyd’s demise has given rise to a munity of various kinds across the globe. Apart from war against discrimination, there is a cry out against throttling of free press too. […]