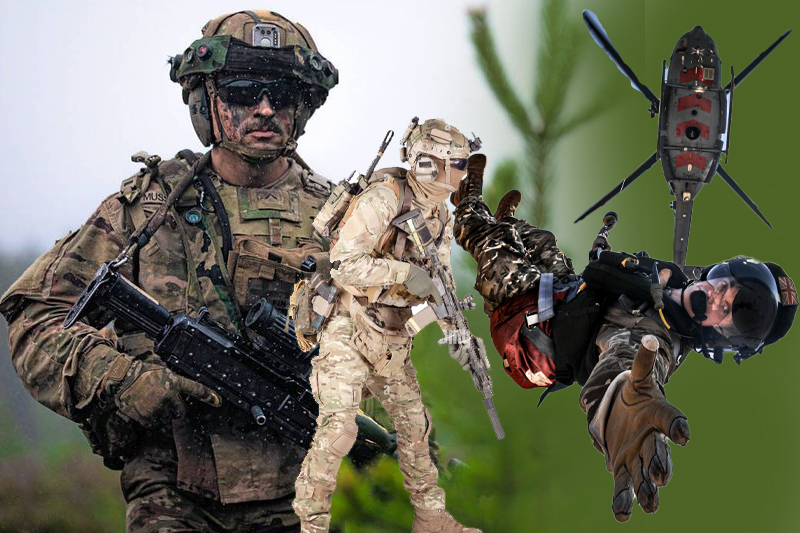 All military occupations are (or have the potential to be) dangerous in some way. Nevertheless, it is an irrefutable fact that some occupations are inherently more hazardous than others, particularly those involving increased exposure to aggressive or hazardous working conditions.

To identify some of these positions, we’ve prepared a very controversial list of the most dangerous jobs in the military, including a few that may come as a surprise.

Who can say? It may even assist you in choosing a career path.

The most dangerous job in the military is being a Rifleman.

Riflemen are the physical boots on the ground for any military operation. Riflemen are primarily the reserve of infantry units; however, other branches or cap badges, such as artillery, engineers, and cavalry can also fulfill this role.

Although riflemen frequently receive assistance from tanks and aircraft, they must ultimately rely on their own talents and training to accomplish their duties. They are aware that every time they engage in combat, they risk their lives, yet they do so willingly because they believe in the cause they are fighting for.

A former member of the 1st Battalion Staffordshire Regiment of the British Army told us, “As an infantryman and mortar fire controller, I was responsible for deploying mortar and artillery to the frontline if necessary. “Fortunately, I was not sent to Iraq or Afghanistan, where the situation was extremely perilous.”

Away from the battlefield, infantrymen and women (women have been permitted to apply for previously closed combat infantry roles in recent years) are not averse to danger. Numerous incidents of fatal training mishaps have been documented (especially when live ammo is used), and the suicide rates of former riflemen are unusually high.

Second on the list of most dangerous jobs in the military is being an EOD expert.

When your profession requires dealing with highly dangerous and frequently crudely made explosive devices, it’s easy to see why EOD specialists are included on this list.

Each military has its own variety of EOD technicians, but they all face the same amount of risk. In addition to the explosive devices they must disarm, collect, or destroy, they face the same small-arms and IED hazards as everyone else. As Chris Hunter explains in his famous account of life as an ATO in Iraq, Eight Lives Down, bomb-makers actively target bomb disposal professionals by studying their methods and strategies and searching for potential weaknesses.

Numerous EOD technicians suffer from burnout or, sadly, their luck eventually runs out as a result of the predictable, extraordinarily high levels of stress associated with the profession.

There have been numerous accidents resulting in injuries and deaths in recent years. Accidents have been caused by human error on occasion. In other instances, they were caused by malfunctioning equipment or inaccurate data. Accidents pose a very serious threat to EOD employees on a daily basis, regardless of the circumstance.

Regardless of perspective, there are no more demanding jobs.

Another dangerous job in the military is being a Forward Observer.

Forward observers (or “pathfinders”), known by many names according on their branch of service, are entrusted with entering enemy territory and identifying targets, locations, and intelligence for use in operations.

In addition, pathfinders are frequently required to work in hazardous environments, such as mountains or deep forests. Pathfinders play a crucial part in military operations despite the dangers they confront. Without their abilities and knowledge, soldiers would be oblivious to the enemy’s movements and at a severe disadvantage in battle.

Not only do the forward observers lack combat support, but there are no supply routes, thus things can rapidly deteriorate if they are captured. Therefore, forward observers are highly trained, autonomous, and subject to a renowned screening procedure; only a select few are regarded as qualified for the job.

Being a Calvary Scout is also one of the most dangerous jobs in the military.

Similar to forward observers, cavalry scouts and recon squads operate in uncharted territory within conflict zones. They are typically at the forefront of any advance and, as such, face the brunt of whatever resistance lies in wait.

Aside from the obvious immediate danger this duty offers, recon units frequently spend extended periods of time without respite in the front lines. During the 2003 invasion of Iraq, the 1st Reconnaissance Battalion of the United States Marine Corps served as the spearhead unit for three months, as described in Evan Wright’s Generation Kill. This constant requirement to stay on high alert can lead to a variety of challenges, necessitating extraordinary physical and mental endurance from recon personnel.

A Combat Medic’s job isn’t easy, and it is actually one of the most dangerous jobs in the military.

Combat medics, who patrol with riflemen, unquestionably fall into this category due to the enemy’s perception of their worth.

When rushing to treat a wounded comrade, it’s dangerous enough to expose yourself to small-arms fire and IEDs, but when you have a target on your back — attacked by enemy fighters who understand the psychological effects of destroying the only immediate means of life-saving treatment — then things become much more frightening.

Since World War II, despite being protected as noncombatants by the Geneva Convention, doctors have been targeted by enemy soldiers for this reason, making it one of the most dangerous positions in the military.

Did you know being a driver for the army is one the most dangerous jobs in the field?

It is a well-established principle of warfare that an army is only as strong as its supply lines; hence, vehicle convoys are an appealing and relatively simple target for enemy forces. In the United States military, drivers are known as 88 Mikes (or, more sarcastically, as 88 “mistakes”) because they frequently suffer the brunt of lethal roadside IEDs.

Of course, drivers are also responsible for handling armored personnel carriers (APCs) on patrol; this can be a difficult task at the best of times, and even more so when something goes wrong and a quick evacuation is necessary.

Most services have a version of “aviation survival technician,” however the United Kingdom has no comparable to the United States’ renowned Air Force Pararescue unit. They are responsible for personnel recovery, rescue, and initial medical treatment during war and humanitarian missions.

The dangers associated with the job are numerous. On very challenging operations, such as locating and recovering downed soldiers at sea or attending “hot” battle zones where the chance of being shot down is extremely high, a variety of things can go wrong. Whether it’s a well-placed RPG strike, the unpredictability of mother nature, or any of the risks connected with rotary flight, winchmen and pararescue operatives are exposed to a variety of potentially lethal elements.

Being a combat engineer is also a dangerous occupation in the military field.

In the military, combat engineers can sometimes be compared to generalists. In addition to their tasks in building and engineering, they are also the go-to specialists on weapons, mines, and demolitions, in addition to their conventional soldiering duties.

Obviously, this can result in potentially hazardous circumstances. Engineers are frequently charged with constructing or repairing systems in remote or risky regions, and while these installations are intended to be safeguarded, this is not always the case. Considering the regular dangers of building sites and, of course, the risks associated with playing with explosives, it becomes clear that combat engineering is not a game.

Being a pilot is risky in any profession, but when enemy combatants are actively attempting to shoot down your aircraft, the danger level increases.

Adding insult to injury, military aircraft are notoriously tough to pilot. The Eurofighter Typhoon, for example, has a maximum speed of 2,495 kilometers per hour, whereas the Apache helicopter, according to former pilot Ed Macy’s book Apache, requires its pilots’ eyes to function independently of one another.

Last on the list is being a Special Forces Soldier!

The SAS, Navy SEALs, and SBS work on a fundamentally separate level from the rest of the military, despite the fact that the phrase “special forces” embraces a vast number of specialized formations.

The majority of their missions are designed to be high-risk and low-reward. Consequently, their existence in specific regions is rarely known to the general population. Naturally, when operating in such small numbers and with so little assistance, “operators” (as they are commonly known) can find themselves in exceedingly perilous situations.

Special forces troops possess a combination of several of the talents on this list; hence, only the most well-rounded and dedicated candidates survive the arduous selection courses. Several candidates have perished attempting to complete the SAS selection procedure, for example.

That is the rundown of the most dangerous jobs in the military! Which job are you willing to try out?

10 Most Dangerous Countries For Workers in the world