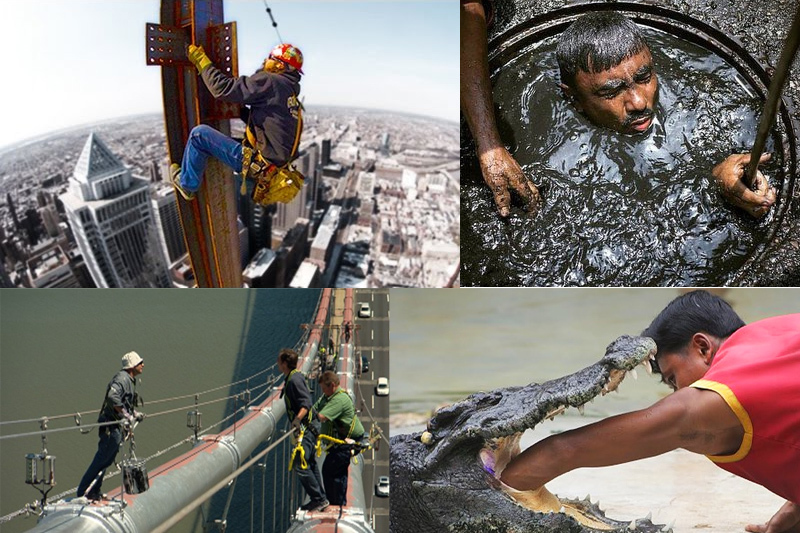 Global – Despite the fact that injuries in the workplace are a normal yet regrettable element of employment, some occupations remain more hazardous than others.

Curious as to whether your occupation ranks among the most hazardous in America?

According to the Occupational Safety and Health Administration’s (OSHA) death rate, the following occupations are the most hazardous.

The most dangerous job is Fishing and Hunting!

Fishing and hunting employees interact with wildlife in numerous ways. In order to fulfill their responsibilities, they set traps, reel in commercial catches, and operate heavy machinery. These frequently hazardous conditions make this occupation the most hazardous in the country. Deaths are frequently attributed to drowning, although accidents involving heavy machinery can also result in fatalities.

Second on the list of the most dangerous jobs in the world is Logging!

Loggers perform their duties in woods and other outdoor settings. They are responsible for chopping down trees with heavy machinery to produce raw materials such as lumber, paper, and cardboard. Conditions requiring the use of heavy machinery and interaction with harmful objects are examples of the hazardous aspects of this occupation. Injuries caused by heavy machinery are the leading cause of death in this area.

Another dangerous job is Roofing! Roofing is one of the most hazardous occupations in existence. The most common causes of fatal injuries are falls from the roof they are working on or the ladders they utilize throughout the course of their employment.

It wouldn’t be a list of dangerous jobs if Construction Work wasn’t included.

There are a variety of tasks assigned to construction workers, the most of which pose an elevated risk of injury. Construction workers are exposed to an environment in which objects can fall on them or they themselves can fall from enormous heights. Missteps on ladders and accidents involving heavy machinery are frequent causes of fatal injuries.

Fifth on the list of the most dangerous jobs in the world are Aircraft Pilots and Flight Engineers.

In 2018, aircraft pilots and flight engineers were ranked second and third, respectively, in terms of professions with the greatest fatal injury rate. However, this ranking has since changed. Frequently, fatal accidents in this field are caused by transportation events. Private aircraft and helicopters represent the most hazardous components of this career, as commercial aircraft remain incredibly safe.

Did you know Garbage Collectors are one of the most dangerous jobs in the world?

Refuse waste and recyclable material collectors, such as garbage men, are subjected to a harsh environment on a daily basis.

Injuries and fatalities are common among this crew as a result of accidents involving heavy machinery on the utilized vehicles. Due to the fact that these workers frequently stop in the middle of traffic lanes to collect trash, one of the leading causes of fatalities in this area is workers being struck by the garbage truck or another vehicle.

Another on the list of the most dangerous jobs in the world are the fields of Structural Iron and Steel workers!

Accidental falls, slips, and trips are one of the leading causes of mortality in this field. Due to the fact that these workers are tasked with erecting enormous steel structures, they are frequently atop ladders, operating heavy machines, or lifting, loading, and unloading steel. These responsibilities all present several potential for inadvertent errors.

It might be normal for us to see these workers, but truck driving and delivery services are actually one of the most dangerous jobs in the world!

Accidents involving motor vehicles present a risk of injury or death for truck drivers, particularly those who make local deliveries on a smaller scale. Accidents continue to be the primary factor in this industry’s highest number of fatalities.

The mines surely are a scary place, and that is why an underground mining machine operator is classified as one of the most dangerous jobs in the world.

The likelihood of a miner being injured or killed while performing their job tasks, which include operating heavy machinery, is significantly increased. Accidents involving transportation or heavy machinery, as well as collisions with other items or pieces of apparatus, are among the most common causes of mortality.

Last on the list of the most dangerous jobs are farmers!

And that concludes the top 10 most dangerous jobs in the world! Which job do you think is the hardest to do?