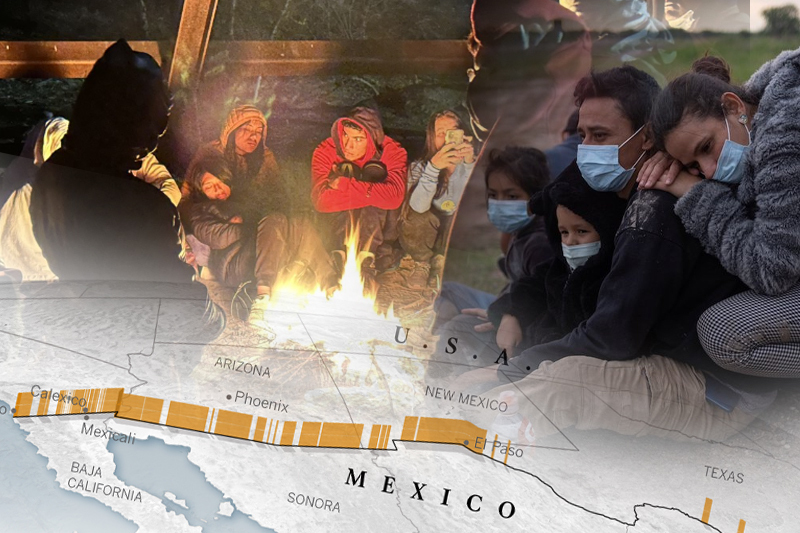 migrants kept warm by good samaritans at us

Since the United States began planning for a potential change in regulations that had shut the border, the number of desperate migrants crossing from Mexico has increased, and Rosa Falcon has converted her Texas home into a sanctuary for them.

She could not stand the sight of hundreds of people huddling together on the streets of El Paso in the icy winter cold.

Falcon said as she made her nightly rounds around the city that borders Mexico’s Ciudad Juarez, “To leave people like that, adrift, on the street, seems senseless and inhumane to me.

According to a contentious health precaution implemented by the then-President Donald Trump during the COVID-19 outbreak, the southern border of the United States has been formally blocked to immigrants without visas for more than two years.

By prohibiting asylum seekers from showing up at ports of entry, Title 42 enables border patrol agents to turn them away without initiating an asylum application.

Its claimed goal is to stop people carrying contagious diseases from entering the United States.

However, detractors claim that it is useless because COVID-19 is endemic in the nation (the United States has recorded almost 100 million confirmed cases). They assert that the actual goal is to keep immigrants out.

Asylum seekers who are aware that ports of entry are closed to them instead look for openings in the fence and other frequently used crossing points.

Once inside, they present themselves to understaffed border guards who transport them to facilities where their applications are examined; if approved, they are then released with a deadline for when their application for asylum will be reviewed.

Those who have relatives in El Paso wait for money transfers from friends and family so they can purchase a bus ticket. Many people merely have their clothes and sleep in the open.

It’s devastating, especially when there are kids involved, said Falcon, a teacher who has developed a network of allies among volunteers and neighbourhood churches.

In October alone, more over 53,000 migrants turned themselves in to border officials after entering here illegally, a 280% rise from the same month last year.

Many arrive in abject poverty, starving and worn out from a gruelling trek through Panama’s Darien jungle, or wet and filthy from wading across the Rio Grande, the river between Mexico and the United States.

The number of persons who have crossed the border illegally and arrived in El Paso has increased recently.

In order to free up resources to assist them, Mayor Oscar Leeser has proclaimed a state of emergency due to the alarming numbers.

After Obama made his pronouncement on Saturday night, a bus pulled up to a terminal in downtown El Paso, a popular stopping point for migrants fleeing poverty and heading to other cities.

A municipal representative added, “Anyone who doesn’t have a ticket before tomorrow can come with us,” adding that they will be escorted to a hotel to sleep.

The majority of people at the bus station stood their ground.

The 23-year-old Colombian Santiago stated, “We have heard so much. “How can we believe in them? Suppose they transport us to an other state.”