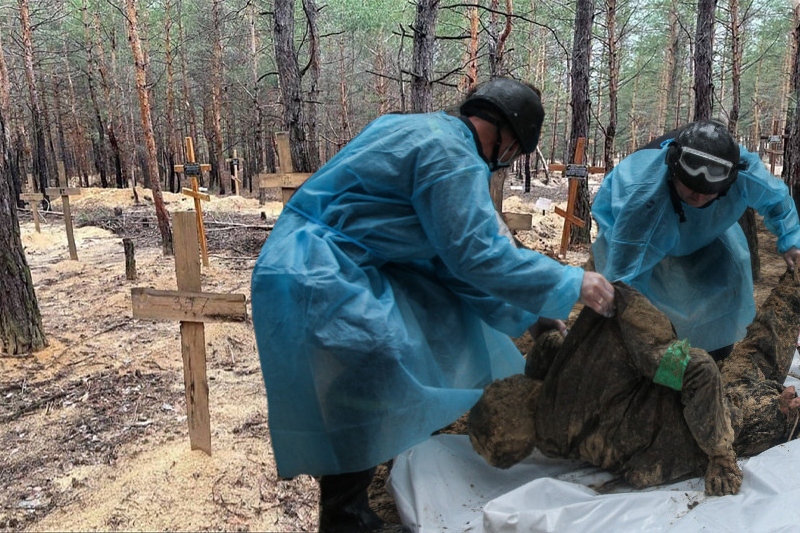 how ukraine found izyum full of stories of civilian torture

Ukraine – A mass grave on the edge of Izyum in Ukraine was discovered as Ukraine claimed back the city a while ago. When it was captured by Russians, the city was blown up strategically, with police stations and prisons left alone.

The dilapidated prisons have horror stories to tell on the walls, where Ukrainian prisoners of war were held. Their torture was beyond endurance. But many survived it maybe due to the sense of hope of being rescued; while Russians really didn’t leave too much in their body for them to have a sense of hope.

An encounter is recalled by one of the prisoners who were rescued; and a Ukrainian soldier speaks up to the BBC that reported on this initially, “Darkness closes in as we descend the stairs to two lower floors of cells. Most are small and bare, apart from grimy bedding and some discarded clothing.”

In one cell someone has etched lines on the wall, recording the length of their captivity. The silence is broken by a Ukrainian soldier.

Inhuman torture accounts for pressing needles in your back, breaking legs and arms and beating them to an extend of non-repair, electric shocks till many went unconscious, and more. All on trumped up charged of sabotage by the Russians which also included some media professionals as well.

As Russians were thrown out, their modus operandi speaks volumes of what they might have put others through. A nearby police station is investigated and, in some drawers, one finds crude small axes used to give sharp single blows. There are traces of blood on most; unwashed and rusted. Investigation will spill the beans later.

In a pine forest on the edge of the city forensic teams are continuing to exhume human remains from more than 440 graves. The authorities say the dead are mostly civilians, but one grave contained the bodies of 17 soldiers, some with their hands bound and bearing signs of torture.