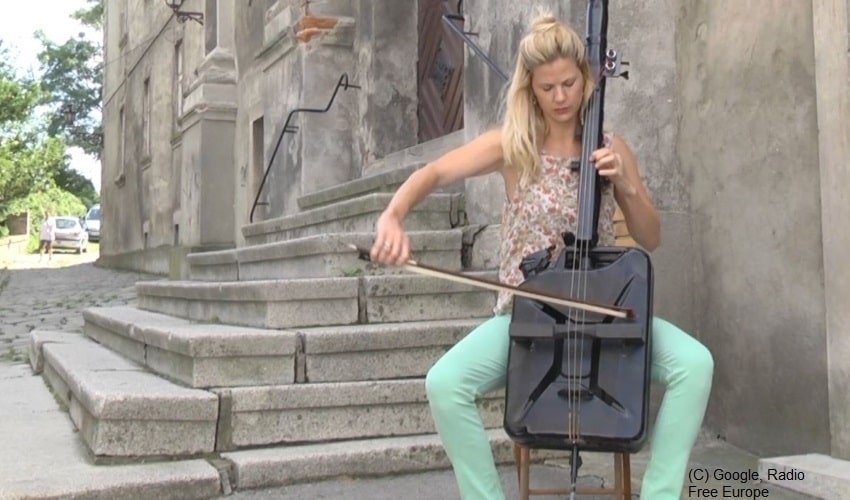 Serbian artist Nikola Macura decided to give new life to the military equipment used during the wars in Yugoslavia, transforming them into musical instruments

Serbian artist Nikola Macura decided to give new life to the military equipment used during the wars in Yugoslavia, transforming them into musical instruments. So, a Kalashnikov became a guitar. A helmet and a grenade sound like a saxophone, a cello was made from a mortar part. The artist managed to transform weapons into peace instruments. He reinvented what until a few years ago was used to create chaos and death in music. “I wanted to give these objects a new perspective,” says Nikola Macura, professor of Sculpture at the Academy of Fine Arts in Novi Sad, Serbia. For months in his studio, he transformed old war remnants of the Yugoslav wars into musical instruments. He designs, disassembles and reassembles, paints, attaches ropes and pegs. All these objects now become an installation, from noise to sound. From the sound of weapons to the harmony of music.

Macura has been able to cope with aggression and destruction in our societies. Unfortunately, this topic still very current in the Balkans where he lives. He has created works that tell his environment, the he experienced of him. By redesigning this military equipment, he changed his perspective. He gave the remnants of war a new life, from the crackle they made during the war to another kind of sound, that of music. Even today, the Balkans are surrounded by war remnants. It was not difficult for the artist to recover the necessary materials. He went around the country to collect them. Serbia is full of this military “waste.” Europol estimates that there are between 3 and 6 million firearms in circulation in the region. They are the remnants of the wars of the 1990s in the area. Some neighbors and friends have brought him. Some others he bought them. Many visibly are worn, which means they were employed in the wars in former Yugoslavia between 1991 and 2001.

As a child, the professor lived in a small village on the border with Croatia. From that period, he remembers only a large number of refugees, a frightening economic crisis, and many weapons. At that time, it was easy to get one. Even children could do it. The artist’s grandmother used the large antiaircraft shells as vases to plant flowers on the balcony. Later, in ’99, when he was studying Sculpture in Novi Sad, he experienced the war much more directly with the bombing by NATO on all of Serbia, which lasted for months. Novi Sad will be the European capital of culture next year. Nikola Makura has created violins, cellos, trumpets, guitars. Now he would like to form a traveling orchestra. He would like to buy a tank and turn it into a musical vessel. Then he can travel Europe, offering these instruments to real musicians to make good music and talk about the war to the world differently.