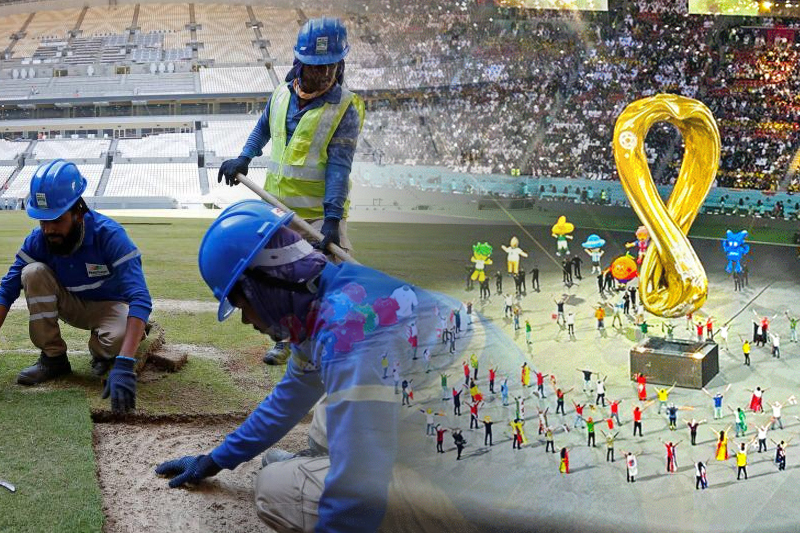 Human Rights Watch stated today that the 2022 World Cup is coming to a close without any pledge from FIFA or the Qatari government to address abuses, including unexplained deaths, that migrant labourers endured over the previous 12 years in order to make the tournament feasible. The tournament’s final game will take place in the gleaming Lusail stadium on December 18, 2022, which is both International Migrants Day and Qatar’s National Day.

However, “FIFA and Qatar will have decided to leave behind a legacy of exploitation and shame unless they provide a remedy for the widespread unaddressed violations faced by migrants who planned and delivered the event.”

On May 19, 2022, Human Rights Watch demanded of FIFA and Qatari authorities that they provide a remedy for serious abuses that migrant workers have endured since the 2022 World Cup was awarded to Qatar in 2010.

Human Rights Watch was joined by a global coalition of human rights organisations, migrant rights groups, labour unions, and fan groups in this demand. Since then, the campaign has received support from a wide range of international individuals and organisations, including the general public, football associations, sponsors, politicians, and sportsmen.

The kafala (sponsorship) system, which was formed before Qatar gained independence in 1971 and was essentially a product of the British colonial era, has undergone substantial modifications in recent years that allow workers to leave the nation and change occupations without the consent of their employers. The Universal Reimbursement Scheme, which reimburses workers who pay illegal recruitment costs, was one of the Supreme Committee’s significant achievements.

This group is in charge of organising and implementing the World Cup infrastructure. Human Rights Watch has discovered, however, that these reforms either came too late, had an inadequate scope, or were poorly implemented, causing many of the employees who contributed to the infrastructure for the World Cup to fall between the gaps.

FIFA has previously said in a number of messages, including briefings to numerous groups, that they intended to pay workers and establish a stand-alone migrant workers’ facility since June. However, they reneged on their promise to offer a solution on the eve of the competition.

Instead, the government of Qatar and FIFA have made blatantly false and deceptive statements that the country’s current institutions are sufficient to address widespread historical and ongoing worker abuses.

Only in 2020 was the fund made active to compensate employees if their employers refused to pay them the salaries they were due as a result of labour court judgements in their favour.

The benefits are capped, the fund is only available for wage theft, and it is practically impossible for workers to apply once they return to their home countries. It also takes years to secure labour court judgements before workers can apply to the fund. Additionally, it doesn’t address pay theft in the ten years before to its founding, much alone workplace accidents, fatalities, or injuries.

In order to reach more workers, including those who continue to pursue restitution for stolen earnings, a remedy fund might be established using the current compensation plans. In order for families who lost a provider to receive the compensation they require to feed themselves and send their children to school, it would also need to reach the families of employees who died in situations that Qatari authorities never looked into.

The month-long competition has received unprecedented worldwide attention to migrant rights problems. Migrant workers and the families of deceased workers bravely shared their accounts of widespread abuses, including theft of wages, difficulty repaying loans for illegal recruitment fees to work in Qatar, difficulty grieving the loss of loved ones who died in Qatar without an explanation, and the lack of support they encountered when trying to report abuses or seek redress.