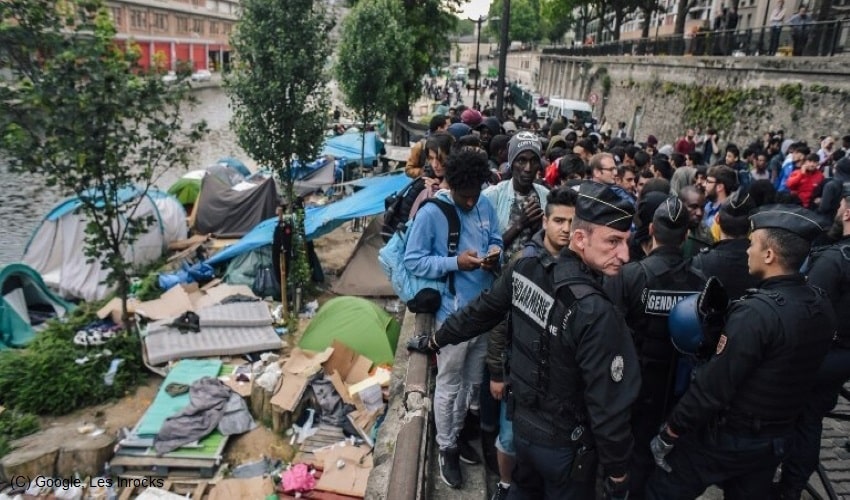 Paris migrant camp has been rocked by human rights violations that has unearthed violence against media and journalists. Two police officers are under investigation for attacking journalists on more than one occasion. These officers were dispatched to remove a group of mainly Afghan migrants from Place de la République in the centre of Paris recently.

Episodes of notoriety and deliberate physical violence were filmed by the social media. One officer was found tripping a man who was running away from the police. This made him fall and injure himself badly. The second officer pinned a journalist to the ground while appearing to be threatening him with a truncheon.

Violence was also used with other immigrants that were trying to dissuade the officers from tearing off makeshift tents. This was despite appeals made to a number of local councillors, politicians, lawyers and humanitarian organisers. Immigrants from various parts of Middle East nations have been trying to find a place to stay.

Scenes of brutal eviction of a migrant camp by French police forces last night in Paris are appalling and shameful https://t.co/9XAd7fL1pc pic.twitter.com/5pR3toLnyy

The stand is ironic to the recent speeches that French president Emmanuel Macron has been making over equal rights of French nationals. It seems there is no concern for the lives of the immigrants stuck in transit. The French authorities were ordered to send in a squadron of mobile gendarmes as well as officers from the anti-crime brigade and several companies from a “security and intervention unit” to break up the camp.

This camp was relocated from an ad-hoc one on the northern edge of Paris at Saint-Denis. Several hundred migrants had set up tents in Place de la République after a call by humanitarian organisations. Literally all of them were thrown out of the ad-hoc one.

Paris is a hot spot for the stopover for migrants. Thousands have travelled from Paris to the port of Calais and attempted to stow away on trucks heading across the Channel to England. A small number attempt the crossing by boat.