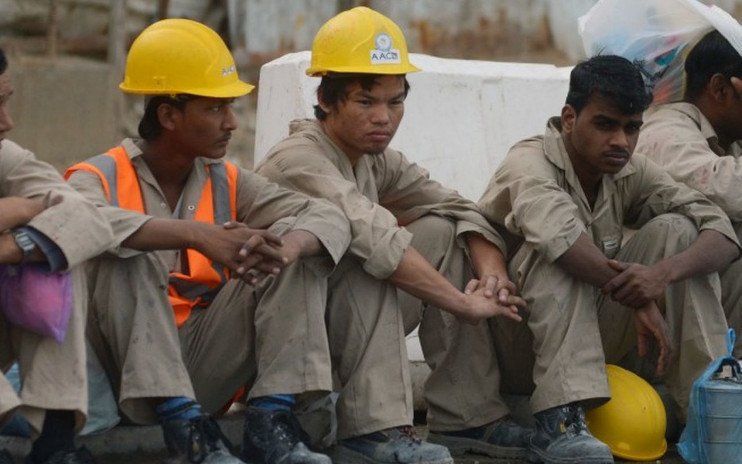 An Egyptian human rights organization has revealed that migrant workers in Qatar have been subjected to serious violations, against the backdrop of the demonstrations they conducted, in protest against the harsh living conditions in which they work and live.

Maat Foundation for Peace, Development and Human Rights “Egyptian” said that migrant workers in Qatar are subjected to violence, against the backdrop of the recent demonstrations that took place, which resulted in the breaking of a number of buses and cars belonging to companies that they work for.

The rights organization added in a report that Elaf received a copy of that the migrant workers demonstrations came «in protest against the poor conditions and the delay in their financial dues, as well as the harsh conditions in which they live, and forcing them to work under the burning sun, which may reach 50 degrees Celsius in The summer season, however, the Qatari security forces met the protesters with force and violence, and many of them were seriously injured.

In its report, the Foundation added that it is deeply concerned about the violence that the Qatari government is adopting to suppress the protesters, and completely ignoring the voices of workers calling for their rights stolen from them in a system closer to forced labor, in violation of all international conventions and agreements.

The report pointed out that foreign workers in Qatar live in overcrowded camps in the middle of the desert that are not suitable for human habitation, and the number of deaths among foreign workers related to construction work of World Cup facilities only reached nearly 1,800 people, and it is expected that the number will increase by 7000 workers by the time of the start of World Cup 2022.

Ayman Aqeel, head of Maat Foundation, said: “Qatar has become more like an ‘open prison’, and it has become necessary for the international community to pressure the Qatari authorities to end the tragic conditions in which migrant workers live in Qatar.”

Aqeel stressed the necessity of paying the financial dues to these workers, the need for the International Labor Organization to conduct periodic inspections of workplaces, and the importance of informing the world of what is happening to these workers in terms of grave violations against them, and revealing the factual facts about the migratory conditions experienced by migrant workers in the State of Qatar.

For his part, Mohammed Al-Banna, a researcher in charge of Gulf affairs, commented on the foundation, saying: “The sponsorship system has not been radically abolished, and if the name changes, the work in it is still continuing and well established in the actual reality in Qatar.”

He stressed the need to allow all foreign workers to change their jobs without the employer’s permission, to cancel the charge of “flight”, to expand the abolition of the “exit permit” to include all workers, and that one of the minimum sufficient wages should be set for all workers.

He also stressed the importance of paying financial dues to workers who had been deprived of their human and material rights by Qatar, whose payment was delayed by nearly six months.

In another report, the Egyptian organization called on the Qatari authorities not to deport the activist, Ebelikim Youssef, 53, a Muslim from the Uighur minority, to China, where he is expected to be imprisoned, tortured, and possibly executed.

The Maat Foundation believes that the deportation of Iblikim amounts to forced deportation, which is prohibited under international law.

According to the foundation, “Eblikim” was born in Hotan, in the eastern province of Xinjiang, Turkestan. He left his hometown to Pakistan in 1997 and stayed there until the end of last month, then left her for Bosnia after he felt a threat to his life.

He pointed out that the Chinese authorities managed from him and decided to transfer him to China, and Iblikim arrived on Qatar Airways to Doha Airport as a transit station before his transfer to China, but he managed to record a video there in which he appealed to the world to prevent his deportation.

For his part, Mohamed Al-Banna, a researcher specializing in the Gulf affairs at the Maat Foundation, said: “While the Qatari regime uses the political asylum law to protect terrorists, it now refuses to use it to grant political asylum to the Uyghur citizen Iplikim,” he said.

According to Al-Banna, “Article 15 of the Qatari Political Asylum Law” states “prohibiting the return of a refugee to his or her country, or to any other country in which he fears that he will be in danger or persecuted”, which is “what applies to the case of Iblikim.”

It is worth noting that Qatar was among 37 countries that signed a letter addressed to the United Nations to support Beijing’s policies towards minorities in the region, which Muslims constitute half of its population, and are subject to persecution by the Chinese government.

Ahaa, its nice discussion on the topic of this piece of writing at this place at
this website, I have read all that, so now me also commenting here.