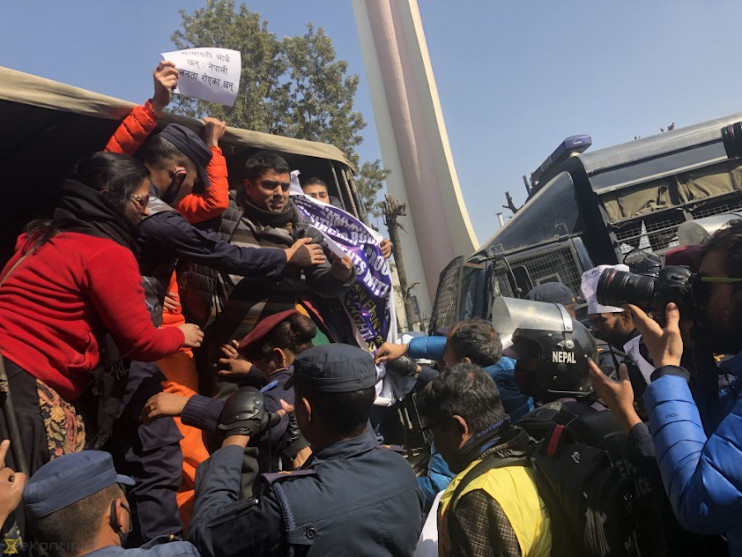 A US State Department report has pointed out cases of extrajudicial killings, arbitrary detention by the state agencies and government’s restriction in the right to freedom.
While cases of human rights violations continue to prevail, the Nepal government is far from taking actions against the perpetrators, says a country report on human rights practices by the US State Department.

The annual report for 2019 released on Wednesday has pointed out the cases of extrajudicial killings and arbitrary detention by the state agencies and the government’s restriction in the right to freedom.
In the report, the State Department has mentioned about the government’s reluctance to initiate action in the extrajudicial killing of Kumar Paudel, Sarlahi district chief of Communist Party of Nepal led by Netra Bikram Chand. Though the police claimed Paudel died in an encounter on June 20 last year, the National Human Rights Commission found that he was shot dead after an arrest.
Though Nepal Police has reported to the commission that the three police officials involved in the killing will be booked, no action to this effect has been taken. The country report also points out the suspicious killing of two youths involved in the kidnapping and death of an 11-year-old boy, Nishan Khadka, in Bhaktapur in September 2018. It also highlights the government’s inaction to book the police personnel whose negligence led to the death of Ram Manohar Yadav, a Madhesi activist, in custody in September two years ago.

“The government investigated but did not hold accountable those officials and security personnel accused of violations of the law,” reads the report. The US government report, which claimed 5.4 million people were without citizenship in 2018, puts the figure at six million in the new release.
“An estimated six million individuals lacked citizenship documentation, although the majority of these would be eligible for citizenship under local law,” the report says without mentioning the source of the data. It also pointed out the discriminatory provisions in granting citizenship to the women.

The report claims those without the citizenship certificates have faced problems in employment, education, housing, access to the government services and even in receiving the relief for the reconstruction of the earthquake-ravaged properties. On the issue of enforced disappearance, there were no such reported cases last year, however, the forceful disappearances from the time insurgency remain unresolved, according to the report.
Based on the data of the human rights commission, the report says the whereabouts of 801 people—of which state agencies were involved in the 606 cases—forcibly disappeared during the conflict are unknown. The International Committee of the Red Cross, which has maintained a record of the disappearances from the time of insurgency, however, says 1,333 people were forcibly disappeared from 1996 to 2006.

“There were significant delays in implementing and granting full independence to the country’s two transitional justice mechanisms,” the report says. It also notes the government’s reluctance in revising the existing Transitional Justice Act which is a must to scrap the amnesty provisions in the law.
The State Department’s report also claims the corruption is visibly present even in the state machinery while the domestic violence against the women and girls remains to be a serious problem.