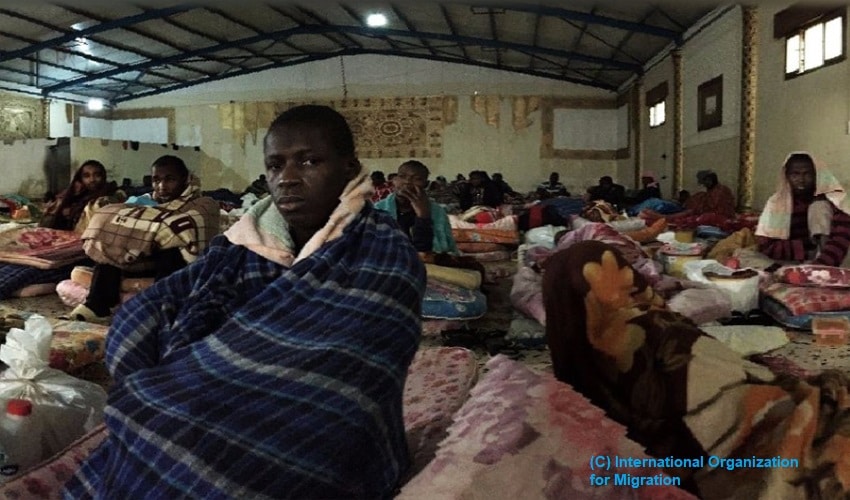 United Nations Secretary General, Antonio Guterres reiterated his appeal to the Libyan government for closure of all the migrants’ detention centres which reportedly had been reduced to hub of human rights abuses

United Nations Secretary General, Antonio Guterres reiterated his appeal to the Libyan government for closure of all the migrants’ detention centres which reportedly had been reduced to hub of human rights abuses. He emphasised how the lack of stable government and political order in the North African country led to gross human rights violations in those centres. According to the UN recent report submitted by Guterres to the UN Security Council, there had been repeated reports of torture, abduction, sexual assault, rape and slavery happening in the detention centers. It added how the shortage of food and absence of health care further worsened the situation of the detainees.

#Libya: A new report by @UN Chief @antonioguterres says more than 2,780 people are being held in Libya's migrant detention centres, with one-fifth of them being children. pic.twitter.com/IOlvZlDePE

“Nothing can justify the horrendous conditions under which refugees and migrants are detained in Libya,” Guterres said in a report submitted on Thursday. He added, “I renew my appeal to the Libyan authorities … to fulfil their obligations under international law and to close all detention centres, in close coordination with United Nations entities.”

As per the report, over 2,780 migrants were still trapped in those gruesome condition in centers across Libya. The mentioned figure was last updated on July 31. In a shocking revelation, the report mentioned that, more than one-fifth of the detainees at the centres were children and underage youths. UN Chief in his plea to Libyan authorities asked them to protect those children until “long-term solutions” could be found.

Children should never be detained, particularly when they are unaccompanied or separated from their parents

The report also exposed how the migrants were forcefully used by the war-torn country to work in arms and munitions departments. They were usually given the task of repairing or reloading firearms for various armed groups fighting to gain control in the country. “Migrants and refugees have been shot at when they attempted to escape, resulting in injuries and deaths,” the report said. Some were even “left on the streets or bushes to die” if they were deemed too weak to survive.

& Reuters coverage:
Pope Francis has compared migrant detention centres in Libya to concentration camps.
“Lager is an abbreviation of the German word ‘Konzentrationslager’, or concentration camp.”https://t.co/HDqmjon5zu

The country has been battling political, economic, social and humanitarian challenges since the overturn of its dictator Moammar Gadhafi in 2011. Its vulnerable political order and location (close to Mediterranean waters) turned it into a major transit point for many migrants and refugees who wish to enter Europe. Every year thousands of refugees and asylum enter Libya in hope of crossing into Europe but hundreds die in Mediterranean Sea or when caught are thrown into detention centres and camps across Libya. Stephanie Williams, head of the UN Support Mission in Libya (UNSMIL) said that this year over 7,000 migrants and refugees tired to cross the border and over 300 died whilst doing so. She urged the European nations to consider “a more humane and predictable disembarkation mechanism” in line with their international human rights. With reference to the Libyan detention centres, Williams said, “Libya cannot be considered as a safe port for disembarkation.”