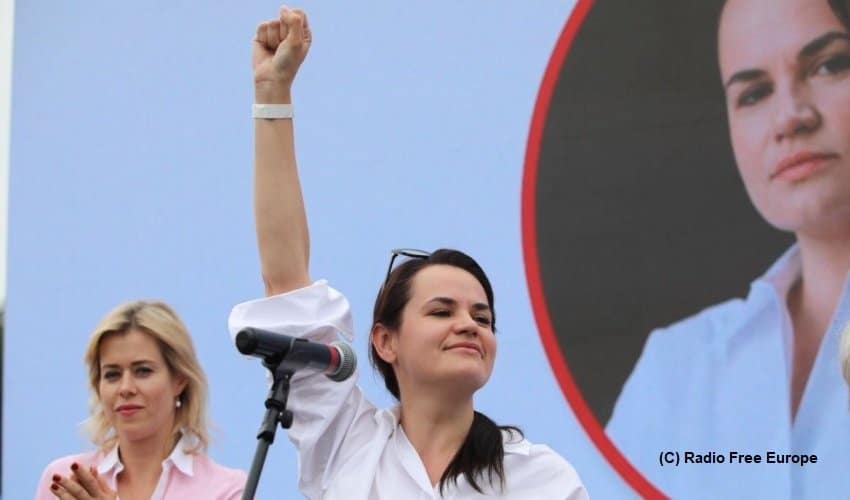 Belarus opposition leader Svetlana Tikhanovskaya in a virtual meeting with the U.N. Security Council from Lithuania, requested the UN Council to help probe and end the governments’ crackdown on peaceful protesters in Belarus, UN News reported.

Belarus opposition leader Svetlana Tikhanovskaya in a virtual meeting with the U.N. Security Council from Lithuania, requested the UN Council to help probe and end the governments’ crackdown on peaceful protesters in Belarus, UN News reported.

The peaceful protests began on the streets of Belarus after the Belarusian President Alexander Lukashenko fixed the presidential elections to proceed in power. A large number of citizens were disillusioned with the outcomes amassed in Minsk, Belarus, and different urban areas on last Sunday and demanded fresh and fair elections.

RT @QuickTake Belarusian opposition leader Sviatlana Tsikhanouskaya appealed an informal meeting to the United Nations to condemn the violent crackdown on protesters in her country pic.twitter.com/ZnPpGDudSY

Tikhanovskaya urged for quick termination of violence by the system and prompt release of all political detainees. She likewise approached the United Nations to denounce the utilization of inordinate force by the Belarusian police against protesters. Moreover, organize a special session of the U.N. Human Rights Council, and to send a global monitoring mission Belarus to record the situation in the region, Tikhanovskaya added.

Sviatlana Tsikhanouskaya was a leading rival in Belarus elections against President Alexander Lukashenko. Following the elections, on August 14, the Belarusian Central Election Commission reported that President Lukashenko got 80.1% of the vote. It set off mass protests by the citizens that led to conflicts with police in Minsk and other Belarusian cities. A large number of demonstrators were arrested.

The presidential election results have been broadly observed as fixed in support of Lukashenko, the European Union, the United States, and many nations have rejected it. Soon the EU will impose sanctions on those found liable for brutality, constraint, and cheating in the election results.

Tsikhanouskaya appealed to the United Nations for an urgent investigation of the post-election brutality, utilization of extreme force by Belarus police, and the release of the arrested peaceful protesters.