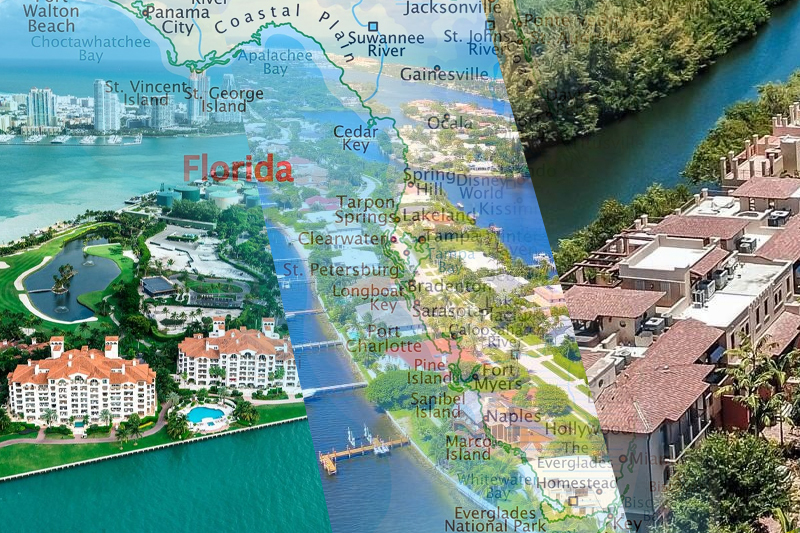 With infinite miles of beachfront, year-round sunshine, and a reduced cost of living, it is indisputable why people from more costly areas such as California and New York are coming to Florida. Florida has historically been one of the most popular tourist destinations. Individuals with a high net worth can save money by relocating to Florida, which has no state income tax and does not tax retirement income. This is one of the numerous reasons Florida is a favorite retirement destination.

With a year-round tropical environment, Florida is the ideal destination for residents to bask in the sun and enjoy an abundance of outdoor activities. In comparison to other beach areas, you will be surrounded by a surprising amount of cheap properties on the beach.

Large cities like Miami, Tampa, and Orlando offer the best dining and social scenes, as well as an abundance of recreational opportunities. On the other hand, families thrive in Florida due to the level of education provided by the state’s schools, and it is an overall fantastic area to raise children.

The richest city in Florida is Fisher Island with a median household income of $227,000.

Fisher Island, one of the country’s most opulent tracts of real estate, completes the list of the wealthiest cities in Florida. This exclusive island with its exclusive neighborhoods is home to some of the wealthiest individuals in the United States. If you are fortunate enough to reside in this neighborhood, you will surely rub elbows with Florida’s most famous and wealthy inhabitants.

Fisher Island is conveniently positioned in Biscayne Bay and was named after Carl Fisher, the originator of Miami Beach. With only roughly 700 households residing on the island, boat travel is crucial as it is the only means of entry and exit.

With a median household income of $201,000, Manalapan comes in second.

Palm Beach County contains the ultra-luxurious and secluded beachfront community of Manalapan. This community is located midway between Delray Beach and Palm Beach. It is a low-density village of only 400 inhabitants that contains the most costly real estate in the entire globe.

The affluent residents of Manalapan can enjoy a serene and quiet environment. Even though it is in an isolated region, homeowners can immediately reach Downtown Miami to enjoy world-class services such as upscale dining and shopping.

With a typical family income of $193,000, Golden Beach consistently ranks as one of the wealthiest cities in Florida. Golden Beach, located in the northeast area of Miami-Dade County, occupies a mile-long stretch of Collins Avenue between the Atlantic Ocean and the Intercoastal Waterway.

There is a tight rule prohibiting commercial and high-rise developments on streets lined with numerous single-family residences. The town’s crown treasure, Loggia Beach Park, is located in a historically significant beachside pavilion that has been elegantly renovated. It is a popular location for parties and activities.

Palm Beach, which is located in southern Florida, is separated from the mainland by Lake Worth Lagoon. The Palm Beach Municipal Beach is a popular destination for locals. Palm Beach is known for its luxurious properties and beaches. Worth Avenue is the main thoroughfare and is dotted with upmarket boutiques, restaurants, and art galleries.

Palm Beach is considered a traveler’s playground, as visitors can engage in watersports such as boating, snorkeling, and paddling. Due to the existence of iconic golf resorts such as PGA National Resort and Spa, golfers will also enjoy the time of their lives in this city.

In Miami, Key Biscayne is located on a barrier island across the Rickenbacker Causeway. This city is bordered by two parks: Crandon Park and Florida State Park. You will be surrounded by beaches, mangroves, and a tropical forest in Key Biscayne.

The coastal barrier reef, which is the only federally recognized underwater archeological route in the entire country, is one of the most distinctive features of this sliver of land.

Pinecrest, one of the wealthiest cities in Florida, offers its residents a suburban lifestyle. Pinecrest is one of the most affluent and family-friendly communities in the Sunshine State. Large estates with a range of architectural styles, including neo-colonial and Mediterranean, can be observed. You will have your own small tropical paradise surrounded by tree-lined lanes.

Even if you live in a suburban community such as Pinecrest, Coral Gables and Miami are accessible by a 30-minute drive. This allows people to have access to world-class amenities while remaining in a calmer environment.

Parkland is one of the most prosperous cities in Florida and is located in Broward County. Parkland is notable for its zoning regulations, which are intended to preserve the city’s park-like beauty.

Parkland is renowned for its strong schools, including its public institutions. This makes Parkland an ideal location for families with children in school. It is easily accessible via roads, and from either side of the expressway, it is simple to reach Fort Lauderdale or Miami.

Eighth on the list of the richest cities in Florida is Roofers.

Southwest Ranches is a suburban town in Broward County that is part of the Miami metropolitan region and approximately 15 miles from the Everglades. Due to its proximity to the Fort Lauderdale area and Miami, a large number of people are interested in relocating to this area. Southwest Ranches is one of the state’s wealthiest and most exclusive communities.

Due to the fact that Southwest Ranches is regarded as an equestrian estate, the community has constructed various equestrian routes. These horse pathways are also multi-use, allowing individuals to bike or walk across the city.

One of the richest cities in Florida is Miami Shores.

Miami Shores, which was officially founded in 1932, is a bedroom neighborhood for those who work in Miami and is well-known for its large retiree population. This region consists primarily of single-family homes with a few multi-unit properties.

Last on the list of the richest cities in Florida is Palmetto Bay.

The small hamlet of Palmetto Bay is known as a thriving community with about 24,000 residents. The residents of this region appreciate the gorgeous scenery and family-friendly environment. Palmetto Bay frequently ranks among the greatest locations to live in Florida for these reasons.

That is the rundown of the richest and most beautiful cities in Florida! Which one would you want to visit?