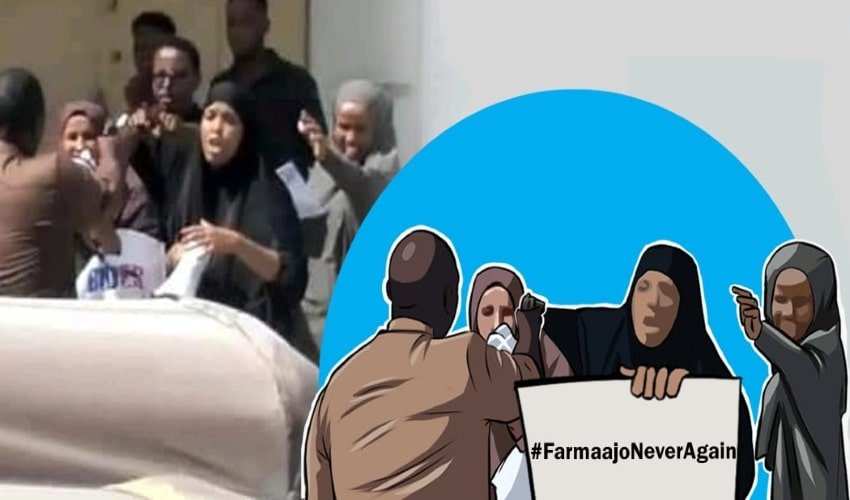 The government has begun to suppress the civilian and journalists who want to express their views, and the Somali people are tired of Farmajo’s dictatorship like ruling

Saturday, 26 December 2020. Government arrests youths protesting against President Farmajo and journalists covering the protests. As far as we know, two girls and a cameraman were filming have been confirmed arrested. The protesters were dispersed by government forces. Meanwhile, a man with a pistol was seen in the crowd trying to fire the protesters. According to reports, the pistol holder fired one of the female journalists among the protest.

Protesters chanted “Farmajo will not return” as they rallied in parts of Mogadishu. People are tired of the failed Farmajo’s policy and need real change as they seek their right to security, a better life and freedom of expression, but the government opposes this by using armed forces and unknown armed people infiltrating the community like a man with a pistol. And In general, the Somali people want change and there will be no return of Farmajo.

The government has begun to suppress the civilian and journalists who want to express their views, and the Somali people are tired of Farmajo’s dictatorship like ruling. Farmajo has ruled the country for four years but the lives of the people need real change and sustainable security. Two weeks ago there were demonstrations in Mogadishu against Farmajo and his government after a coalition of candidates called for people to come together and protest against the government peacefully. Unfortunately, Farmajo’s government took drastic measures to repress civilians and killed people after the army opened fire on them.

Journalists from all key Media Outlets in Mogadishu raise their voice in protest the illegal detention of a journalist Gurbiye who's behind bars for the last 5 days. @M_Farmaajo ordered his arrest after disclosing a ventilator he personally took from Martini hospital. pic.twitter.com/D1czToeK5e

It is clear that the government has lost the trust of the people, because whenever people conduct a protest, the government uses troops and ammunition. Civilians were shot while expressing their views. This completely violates the right to freedom of expression. The people of Mogadishu are tired of the current government and are demanding change. Weeks ago the government raided the homes of opposition candidates after promising to take a direct part in anti-government protests.

“The government is targeting protesters, who are peacefully expressing their views,” said Bashir Maalim. The constitution promises that the Somali people can express their views through peaceful demonstrations. The Farmajo government is oppressing and threatening the people. ”

The former district commissioner of Abdiaziz, who also spoke about the incident, said the protests were in defense of democracy and no one could stop them. The president wants to destroy the constitution.

Meanwhile, members of the arrested youths and the woman who was shot at a press conference condemned the actions of government forces targeting youths and protesters. They also noted that the government should hold free and fair elections and protect the rights of Somali citizens.