Plight of migrant workers in Singapore, unable to maintain even one-metre distance from each other 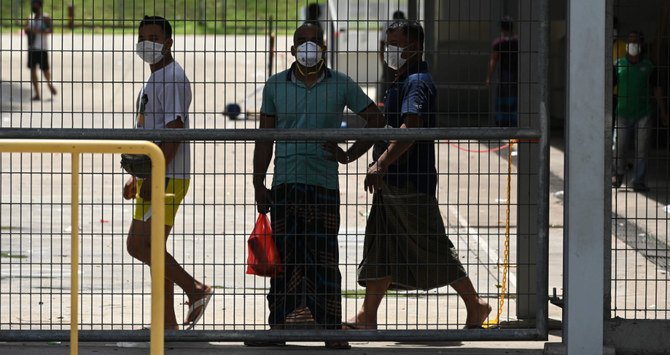 Few weeks ago, Singapore was applauded all over the world for its corona prevention  model as the country was quick to control Covid-19 transmission rate. As soon as the  news of coronavirus pandemic hit the country, it sealed its borders, introduced an extensive contract-tracing programme, ordered for strict adherence to home quarantine rules and, the most effective of all, made tests free for all. The country, did get results a it was able to curb the spread of the deadly contagion, until the second wave of the  novel coronavirus hit the country.

The second wave unveiled an ugly reality which was hiding behind the sheen and glossy facade of the city, the plight of its migrant workers. The second wave and a more powerful one infected thousands of workers. The study conducted by the Centre for Culture-Centred Approach to Research and Evaluation (CARE) unveiled how Singapore’s large migrant community was getting clusters of Covid-19, due to unsanitary living conditions, communal toilets and kitchen and cramped dormitories. CARE’s research showed how ignorant were the authorities as they employed extra man power to clean the city more than usual but made no effort to improve the poor living conditions in dormitories that house thousands of migrant workers in close quarters, putting about 12 to 20 men in a single room.

One of the workers, who was interviewed by the Guardian said, “The way the workers were stacked in [on the back of lorries], it was like the way goats are stacked in when they are taken to a slaughter house.”

Rights group including, Transient Workers Count Too (TWC2) said that they alarmed the authorities of cluster infection as early as February, and the government did take action but a selective one. The government authorities relocated about 7,000 workers from those housing facilities, most of whom were essential jobs workers, while about 293,000 were left to their fate in cramped dormitories.

Rise of corona cases among migrant workers led to increase in racism and xenophobia among local residents. Kokila Annamalai, a local activist raise concern how the migrant workers became target of racist comments made online and in the media. She told the Guardian,“On top of [the view that] ‘it’s their fault for not being clean and for their eating habits’ and things like that, there is also this almost worse mindset of ‘they’re driving our numbers up and it makes us look bad on the world stage, and they should go home”.

With the migrant workers becoming the epicentres of the pandemic, authorities urged the workers living in housing facilities to practice social distancing.  Professor Mohan Dutta who conducted extensive research through in-depth interviews with low-wage migrant workers found that it was not possible for workers to maintain physical distancing because due to small living spaces, leading to Covid-19 outbreaks. He said, “My earlier work conducted with Singapore’s low-wage migrant workers highlighted the poor living conditions and food insecurity they experienced. These conditions, alongside the lack of worker rights and the absence of spaces for workers to voice their demands, are breeding grounds for the pandemic.”