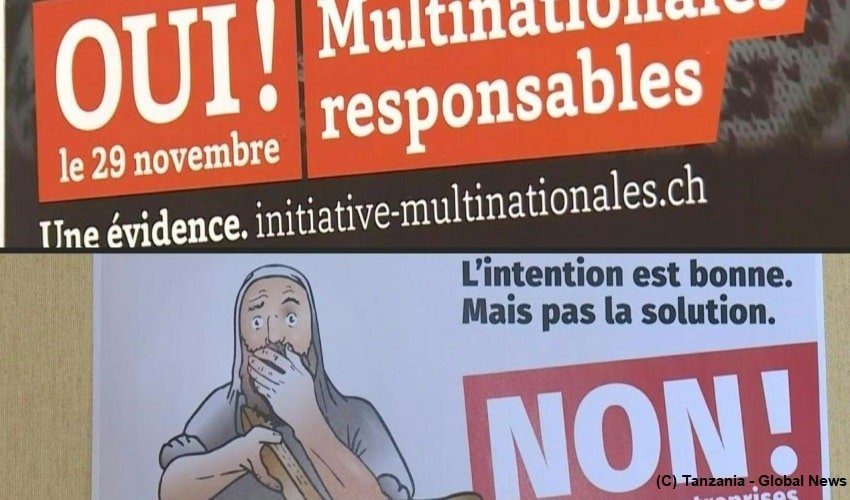 Voters in Switzerland on Sunday narrowly rejected a proposal that would have imposed penalties on multinational corporations for non-compliance with human rights or international environmental standards not only in Switzerland but also in doing business in foreign countries.

With 50.7% percent of the votes in favour, a narrow majority of Swiss backed the proposal titled “Responsible Business Initiative” (RBI) while 49.3% voted against it. Even so, the referendum failed after a majority of the country’s 23 cantons (states) voiced against it. The initiative received support in only eight and a half cantons including Zurich, Basel, Geneva and its capital Bern, with the remaining states voting against.

Super close – Swiss Responsible Business Initiative dismissed, despite 50.7% YES votes! BUT: only majorities in 8.5 cantons instead of necessary 12. A few thousand votes were missing to gain the necessary 3.5 additional cantons. pic.twitter.com/aSj6XknwE6

The proposal could have held Swiss-based multinational companies, their subsidiaries and subcontractors in foreign countries liable in the courts for their business operations violating human rights and environmental standards, unless they present evidence that they performed due diligence. It would have made it mandatory for these MNCs and their subsidiaries abroad to provide evidence verifying their activities in foreign countries.

As the initiative was rejected in the referendum, the government’s counter-proposal with milder legislation has automatically activated. While this legislation contains provisions of due diligence and reporting requirements, it will not require companies to answer to Swiss courts or make them liable for violations or damages caused to human rights and environmental standards. This law is expected to come into effect within the next two years.

According to Swiss media, Sunday’s vote was the most expensive in Switzerland’s history, raising massive debate among groups in the country.

An alliance of 130 non-governmental organisations had launched the initiative with the support of various trade unions. Ahead of the vote, supporters of the initiative had glued posters across Swiss cities and towns, raising awareness about human rights abuses and environmental degradation caused by Swiss companies.

The Swiss government and business sector, on the other hand, had strongly opposed the initiative fearing that the new rules would hamper industrial operations at a time when the economy is recovering from COVID-19 pandemic repercussions. A number of mining, cement and agribusiness companies in Switzerland have been facing criticism for their global business activities violating human rights and environmental laws.

According to official data, multinational corporations are crucial drivers of the economy in Switzerland, accounting for more than a quarter of all jobs in the country. Supporters of the initiative particularly targeted the commodity trading industry that employs 35,000 people in the country.

In a separate vote on Sunday, a measure to ban the financing of weapon manufacturers by Swiss national bank or pension funds also failed. The proposal sought to prevent Swiss financial institutions from funding or investing in companies generating a majority of their revenue from war weapons manufacturing.

Hundreds of farm workers from Trinidad and Tobago “trapped” in Canada