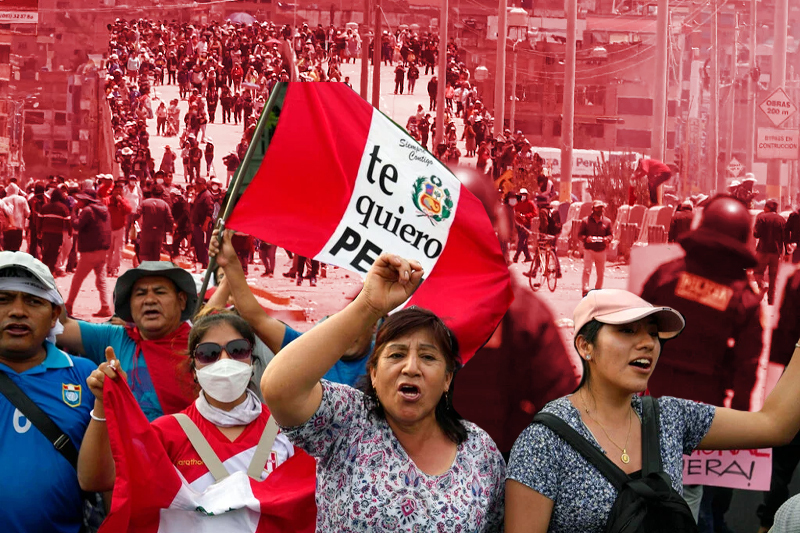 As demonstrators who oppose the present government push for political change, Peru is seeing some of its worst violence in decades, which started last month following the removal of former President Pedro Castillo.

In December, a state of emergency was declared, fights broke out on airports and highways, and hundreds of foreign visitors were trapped in the nation due to the commotion.

Dozens of people have been killed in conflicts with security forces to date, and human rights organizations believe that authorities used disproportionate force, including weapons, against protesters. Reuters reported that the army claims protestors employed makeshift devices and guns.

The new president of Peru, Dina Boluarte, appears to be in the same precarious situation as her predecessor. In January, the office of Peru’s chief prosecutor opened an investigation into Boluarte’s handling of the unrest, and many of her ministers resigned.

Protesters have been calling for fresh elections, Boluarte’s resignation, a reform to the constitution, and Castillo’s release from pre-trial custody.

Castillo, a former teacher and union leader from rural Peru who had never held public office before becoming president, positioned himself as a man of the people. Many of Castillo’s followers come from disadvantaged regions, with the expectation that he will improve the lives of the country’s rural and indigenous populations.

While demonstrations have occurred throughout the country, the most violent incidents have happened in the rural and indigenous south, which has long been at conflict with the coastal White and mestizo elites.

The legislative body of Peru is also viewed with mistrust by the general populace. According to Peruvian law, the president and members of legislature cannot serve multiple terms, and opponents have criticized their lack of political experience.

Boluarte is the sixth president of Peru since 2018, and Peruvian politics have been dysfunctional for years.

Castillo sought to dissolve Congress and form an emergency administration in December, plunging the nation back into political chaos.

Castillo was impeached and removed from office after his brief tenure in government was plagued by many corruption probes. Currently, he is accused of insurrection and conspiracy offenses, which he denies.

In the days following his disappearance, his followers demanded his release in what some have termed a “national insurrection.”

Fear and rage on both sides have been exacerbated by the deaths caused by demonstrators’ encounters with the police.

In early January, demonstrations began after a holiday break. At least 17 people were killed in anti-government riots in the Puno region’s southern city of Juliaca, where the bulk of the indigenous Aymara community resides.

The chief of forensic medicine at Juliaca told CNN en Espaol that autopsies on the 17 deceased people revealed gunshot wounds.

Several days later, a patrolling cop was fatally torched by “unknown people,” according to authorities.

Boluarte has had difficulty appeasing the demonstrators. Mid-December, her defense minister at the time, Otárola, announced a state of emergency and deployed troops to the streets.

Since the demonstrations began, the country’s ombudsman estimates that at least 49 people have died as a result of the violence.

In January, the Peruvian prosecutor began an inquiry into Boluarte, Otárola, and other prominent ministers for the suspected crimes of “genocide, qualified homicide, and significant injury” in relation to the violence. Boluarte stated that she will help with the investigation.

The attorney general’s office also said that it will investigate former Prime Minister Pedro Angulo and former Interior Minister Cesar Cervantes for their role in the management of the demonstrations. Angulo and Cervantes both served under Boluarte for only a few weeks.

Several senior ministers have resigned since the start of the demonstrations. In a statement shared to Twitter, former Peruvian Minister of Labor Eduardo Garca Birmisa resigned on Thursday and demanded that the president repent and organize general elections. The next day, former Interior Minister Victor Rojas Herrera and Minister of Women and Vulnerable Populations Grecia Rojas Ortiz resigned.

Boluarte has stated that, despite rising political pressure, she has no intention of resigning.

Boluarte told the nation in a broadcast address on state-run TV Peru on Friday, “I will not resign; my responsibility is to Peru, not to the little clique that is causing the country to bleed.”

The violence in Peru has attracted international attention. The European Union released a statement on January 10 denouncing the violence and appealing for dialogue in the country. The next day, an Inter-American Commission on Human Rights monitoring team was dispatched to Peru.

“We are very worried about the escalating violence in Peru, as well as the resulting injuries and fatalities. Everyone in Peru deserves to live in peace and enjoy their hard-won democracy. Friday, US Assistant Secretary for Western Hemisphere Affairs Brian A. Nichols tweeted, “We encourage peace on all sides and the government’s stated promises to solve the difficulties consuming the country.”

On January 18, the Organization of American States will meet to “evaluate the situation in Peru.”

Despite his platform’s promises to amend the constitution and boost income redistribution, Castillo failed to fulfill these promises during his brief presidency due to growing inflation in Peru, his lack of political experience, and strong resistance from conservatives in Congress.

In less than a year, scores of ministers were hired, sacked, dismissed, or resigned from their positions, plunging his administration into disarray. Before he was removed from office, Castillo faced many corruption probes and two unsuccessful impeachment efforts.

Castillo has refuted the allegations against him on many occasions and reaffirmed his readiness to help with any corruption inquiry. He asserted that the claims were the product of a witch hunt against him and his family by organizations who refused to acknowledge his election victory.