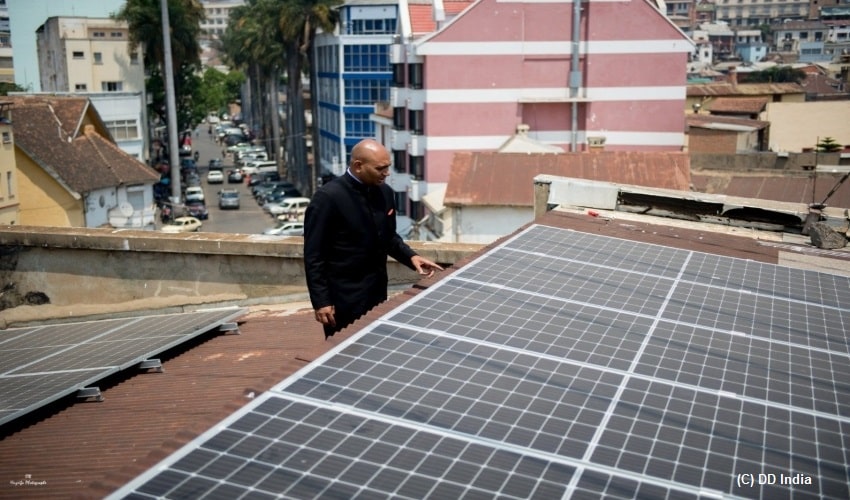 Indian Embassy in Madagascar is set to get solar power plant on October 2 to mark the 150th birth anniversary of Mahatma Gandhi.

Indian Embassy in Madagascar is set to get solar power plant on October 2 to mark the 150th birth anniversary of Mahatma Gandhi. The solar plant is set to be inaugurated at Indian Embassy by Madagascar Prime Minister Christian Ntsay and Ambassador Abhay Kumar.

Indian Ambassador to Madagascar Abhay Kumar tweeted regarding the solar plant inauguration, “On 2 October 2020, as part of the grand finale of 150th birth anniversary celebrations of Mahatma Gandhi, India in Madagascar and Comoros will make a switch to solar power. Please don`t miss this historic moment and catch us live at 5 pm (IST).”

#GandhiJayanti at the Indian embassy in #Madagascar was marked by installation of 8 KW of solar power plant on its rooftop; It becomes first Indian Mission globally to switch to renewable energy for all of its energy consumption @IndembTana @abhishekjha157 pic.twitter.com/kV8GZIg4VG

He also posted another tweet, “Following the words of Mahatma Gandhi, `Be the change you see in the world. On the occasion of Gandhi Jayanti is going to be the first Indian Embassy to go solar.”

India is celebrating Gandhi Jayanti, the 150th birth anniversary of Father of the Nation, Mahatma Gandhi on October 2.

Hi, I think your blog might be having browser compatibility issues.
When I look at your blog site in Firefox, it looks fine but when opening in Internet Explorer, it has some overlapping.
I just wanted to give you a quick heads up!
Other then that, superb blog!

I was wondering if you ever thought of changing the layout of
your site? Its very well written; I love what youve got to say.
But maybe you could a little more in the way of content so people could connect
with it better. Youve got an awful lot of text for only having 1
or two images. Maybe you could space it out better?

Aw, this was a really good post. Finding the time and actual effort to generate a great article… but what can I say… I
hesitate a whole lot and don’t manage to get anything done.