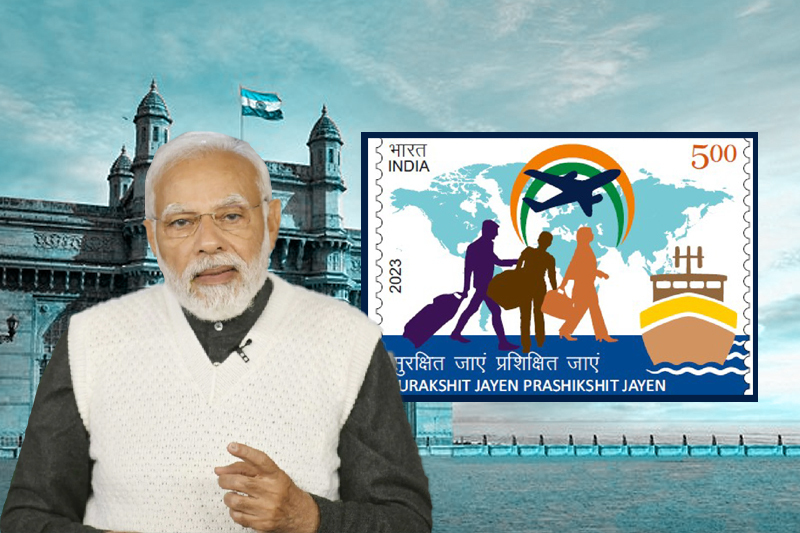 Bhopal: Narendra Modi the Prime Minister of India has released a postage stamp to honor the Indian migrant workers around the world.

At the inauguration of the 17th edition of the Pravasi Bharatiya Divas Convention, in central Madhya Pradesh state in Indore, the stamps were released. This was Monday -9th Jan 2023. The stamp were having the title “Surkakshit Jaayen, Prashikshit Jaayen” which implies go-safely, go-trained.

PM Modi said that it is for reminding the safe, legal, orderly, and skilled migration.

The conference started in 2002. It is the flagship event of the Government of India which gives a platform to connect and connect with Indians living abroad. This year this was started on Monday. Every year this is organized on the 9th of January, which is the day when Mahatma Gandhi returned from South Africa to India.

The event started in India for the first time in 2019. In this ceremony more than 70 countries take part and more than 3500 Indians registered themselves from different regions of the world.

Indians are the largest number of immigrants who are living in different parts of the world. As per the statistics of the Government of India, there are 32 million NRIs and people with foreign citizenship.

The President of Guyana Dr. Mohamed Irfan Ali was the chief guest at the event. For 3 days all the businessmen were introducing achievements of India.

They will participate in a discussion on the role of migrant youth and innovations. Textiles and clothing, health care, and investment are big markets for this.