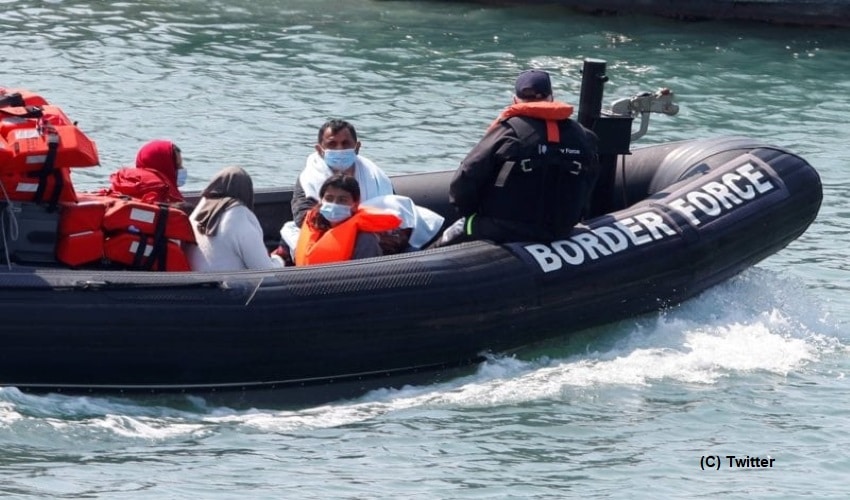 A record number of over 400 migrants crossed the English Channel in a single day in small boats.

A record number of over 400 migrants crossed the English Channel in a single day in small boats. Border Force intercepted 27 boats with 409 people onboard, including young children, some so small that they weren’t able to walk independently.

Earlier on Wednesday, UK Prime Minister Boris Johnson said that UK had “become a target and a magnet for those who would exploit vulnerable people in this way.”

The only word for today is invasion, which I predicted would happen months ago. A record day, perhaps as high as 400. The nation is being humiliated and the government does nothing. pic.twitter.com/YjXlbUCYn1

French authorities also rescued around 53 people before they could reach the British territorial waters. On Tuesday approximately 145 people crossed the Channel in 18 small boats. In August end the Channel crossing had become extremely tough due to rough seas, courtesy Storm Francis. However the conditions have improved with September.

I have a great deal of sympathy with those who are desperate as to put their children in dinghies or in children’s paddling pools and try to cross the channel. But I have to say what they’re doing is falling prey to criminal gangs and they are breaking the law.

He added, “We will address the rigidities in our laws that make this country, I’m afraid, a target and a magnet for those who would exploit vulnerable people in this way.”

In August alone, over 1,468 migrants crossed the English Channel in small boats. This was despite a promise by UK Home Secretary of making the dangerous crossing route “unviable”. Home Office doesn’t present a data of number of children making the crossing through the channel on small boats. On Wednesday Home Office minister Chris Philp told Commons that government is working on returning 1000 people who entered UK having “previously claimed asylum in European countries, and under the regulations legally should be returned there.” Since January 2019 over 7,400 migrants have crossed the English Channel in small dinghies and boats.