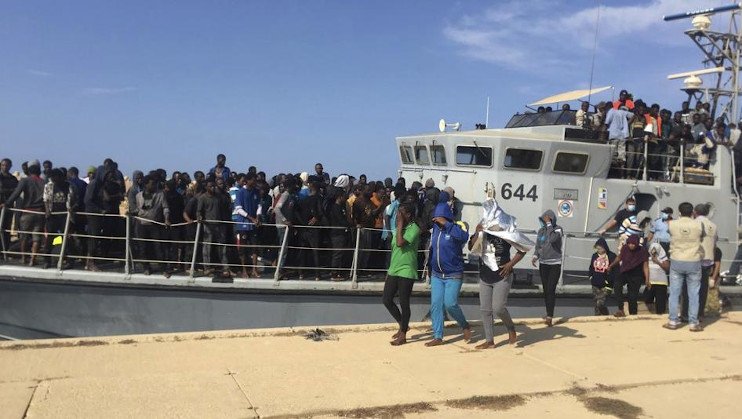 The Italian government should suspend all support to the Libyan Coast Guard until Libya pledges to a clear plan to ensure full respect for migrants’ security and rights, Human Rights Watch said on Wednesday. The plan should include the closure of detention centers for migrants and, in particular, the guarantee of protecting them against arbitrary detention and inhuman and degrading treatment.

“Italy cannot justify its complicity in the suffering of migrants and refugees who fall into the hands of the Libyan Coast Guard,” said Judith Sunderland, associate director of the Europe and Central Asia division of Human Rights Watch. “Humanitarian rhetoric does not justify continued support to the Coast Guard, since Italy knows that people intercepted at sea will return to be detained arbitrarily and to be abused”.

On 9 February 2020, the Italian Ministry of Foreign Affairs announced that it had sent the proposal to amend the 2017 Memorandum of Understanding to Tripoli, which outlines the framework for cooperation on border control between the two countries. The statement merely says that the changes are intended to increase protection for migrants, asylum seekers and refugees in Libya, and to require the strengthening of the activities of the United Nations Refugee Agency, UNHCR, and the International Organization for Migration, IOM. On 30 January the Italian Foreign Minister, Luigi Di Maio, reported to Parliament that Italy will support the closure of detention centers and the opening of structures under the auspices of UN, as well as encouraging a greater number of voluntary returns from Libya to their countries of origin.

The material and technical support of Italy has allowed the Libyan Coast Guard, under the recognition of the UN backed, Tripoli based, Government of National Accord (GNA) to intercept thousands of people at sea. The Libyan Coast Guard then returned people to arbitrary and indefinite terms of detention in structures where they are exposed to a high risk of exploitation and violence, including rape. The Memorandum of Understanding was automatically renewed for another three years on February 2. According to UNHCR data, nearly 40,000 people have been intercepted and brought back to Libya since the Memorandum was signed three years ago.

On January 30, UNHCR announced that it had been forced to close its Reception and Departure Center in Tripoli due to security concerns surrounding ongoing hostilities in the capital. The center was designed to accommodate people on the list for evacuation and resettlement in Europe and elsewhere, however it has hosted hundreds of other people who have fled or been released from official detention centers since the outbreak of the conflict, around Tripoli, in April 2019. According to UNHCR estimates, around 4,000 people were detained in official detention centers at the end of December, to which humanitarian organizations and UN agencies have access only sporadically.

In January 2019, HRW published evidence that support from Italy and other EU member states for humanitarian assistance to detained migrants and asylum seekers, and for evacuation and repatriation programs, has done very little to address the systematic problems of detention and mistreatment of migrants in Libya.

In a mid-January report on the activities of the UN Support Mission to Libya (UNSMIL), the UN secretary general reiterated that Libya is not a safe haven and urged all member countries to “review the policies they support the return of refugees and migrants “. The Council of Europe Commissioner for Human Rights called on Italy to “urgently suspend” cooperation with the Libyan Coast Guard “until there are clear guarantees of respect for human rights”.

Cooperation with the Libyan Coast Guard should only occur if necessary to comply with the obligation under international law of the sea to coordinate the response in the event of an emergency at sea HRW said. In such cases, every effort should be made to secure the landing outside Libya, as long as this country remains a place where migrants are subjected to arbitrary indefinite detention and where they are exposed to a serious risk of abuse.

“Instead of retouching the Memorandum of Understanding,” Sunderland said, “Italian authorities should insist on the closure of detention centers, direct their resources to support safe alternatives to detention, increase evacuations from Libya, including those to Italy, and to resume a leadership role in saving lives at sea”. visit us for more news labour rights latest news.