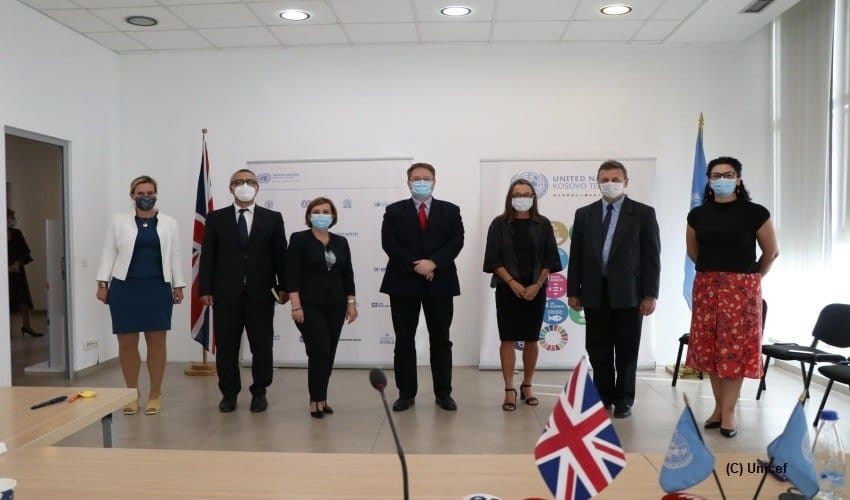 The British Embassy in Pristina has partnered with the United Nations to launch an initiative in Kosovo with the aim of boosting the health and education sector in the country in the aftermath of the COVID-19 pandemic. Through the $2.5 million project, the UK embassy seeks to support the recovery of Kosovo from the first COVID-19 wave and eliminate the threats from future waves of the disease. It has been developed after close consultations with officials from the Health and Education ministries in Kosovo.

Titled “Return to (New) Normal in Kosovo,” the project will be implemented by the UNFPA (United Nations Population Fund), UNICEF (United Nations Children’s Fund), UN Women and the World Health Organisation (WHO) starting from October to March 2021. Under the project, various initiatives will be taken to enhance resilience in Kosovo and the healthcare sector and education sector will be safely and inclusively brought back to normal.

As per a UN statement, the project will work towards strengthening COVID-19 detection capacities in the health sector of Kosovo. In addition, efforts will be taken to create awareness about COVID-19 and its preventive measures using reliable and official information. Besides, COVID-related health services, the project will facilitate the advancement of e-health services which will be made available via phone or the internet. Immunization programmes for children and youngsters will be boosted to secure the health and wellbeing of the community.

We handed over 41,000 test kits to fight #Covid_19 to the @NIPH_RKS & the Ministry of Health, donation by the Government of the Grand Duchy of Luxembourg, @LUinKosovo, #LuxAid 🇱🇺 & the Government of Austria, @AustriainKosovo, @AustrianDev 🇦🇹. Read more: https://t.co/hzXS4xKmqZ pic.twitter.com/sTkETe5U4E

In the education sector, steps will be taken to support the safety of schools amid the COVID-19 pandemic by ensuring that students, teachers, staff members and others in the public adhere to precautionary measures provided by the school authorities. Additional care will be ensured for children with special needs and those at risk of dropping out from schools due to financial or social obligations. Furthermore, the project will essentially cater to the needs of girls and young women.

A virtual signing ceremony was held on Monday in the presence of limited participants including British Ambassador Nicholas Abbott and Ulrika Richardson, the United Nations Development Coordinator Ulrika Richardson in Pristina, along with Jens Wandel, Designate of the Secretary-General for the UN’s COVID-19 Response and Recovery Fund in New York. Other officials from the UNFPA, UNICEF, UN Women and WHO were also present during the ceremony.

Addressing the occasion, Ambassador Abbott expressed gratitude towards the launch of the ambitious project to support Kosovo amid the COVID-19 crisis. Ulrika Richardson reiterated the United Nations’ commitment towards supporting all sections of society in the aftermath of the pandemic, adding that there must be a safe and fair return of normality in Kosovo as the country reopens for business.

Recently, Kosovo’s Health Minister Armend Zemaj announced that the number of PCR tests for COVID-19 will be stepped up across the country after the government received two testing devices as a donation from the WHO.

After a continuous commitment to increase the number of testing devices, the goal is achieved. The PCR testing capacity will be tripled

I believe this is among the such a lot vital information for me.
And i am satisfied reading your article. But wanna remark on some basic issues,
The site taste is ideal, the articles is truly excellent :
D. Just right job, cheers