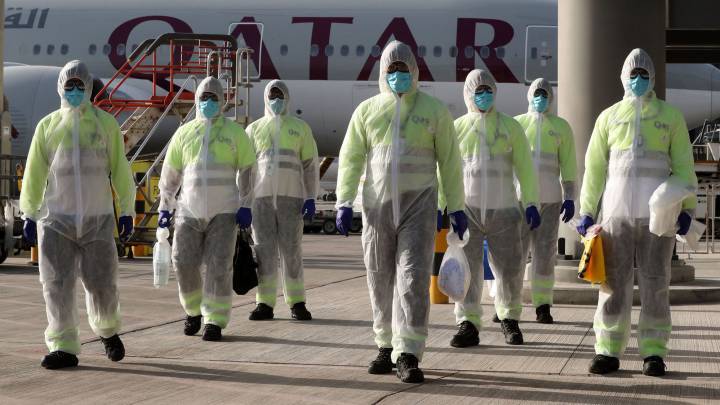 Qatar bought land near Mogadishu airport in Somalia, which has been using as a cemetery to bury those who died due to Covid-19 in its country. The world had already been acquainted with Qatar’s disregard for human rights given the multiple reports exposing the plight of migrant workers in the country, but the global pandemic outbreak unveiled Qatar’s lack of empathy and humanity. Many called the Qatari initiative of burying the dead in Somalian cemetery with an act of saving its face, for its mistreatment of corpses in the recent past, as many dead migrants were denied the right to a dignified burial.

Last month Doha forced Nepal for repatriation of its dead migrant workers, most of whom died due to lack of proper care and treatment amid the coronavirus pandemic. The most appalling aspect of the repatriation drive was how Qatar allowed the transportation of corpses going against the World Health Organisation norms, which asked the authorities to ‘keep both the movement and handling of the body to a minimum’. The act of pushing the bodies of foreign nationals away, showed how Doha did not care enough about hurting the sentiments of the deceased’s family by ripping the dead of dignified burial or cremation. The biased act also unveiled how and to what extent the nation stigmatised the infection.

On April 7, 2020, the German news channel WDR aired a short documentary showing the impact of the coronavirus pandemic on migrant workers in Qatar. By then, Doha already hit the highest per capita Covid-19 infection rate in the world. The documentary showed how in order to combat the virus, the Qatari government introduced multiple measures ranging from testing, contact tracing, social distancing, and closing down of nonessential businesses. But it also exposed Qatar’s dirty underbelly, i.e. the its biased attitude as all those measures where limited to Qatari nationals and migrant workers were not entitled to have even a clean and safe living space.

The Guardian report published in March, showed how Qatar’s labor camps became virtual prisons for the migrant worker, with police guarding the ‘industrial zone’ to keep a check on their movement. “How can workers protect themselves when most camps do not have running water and no hand sanitisers? How can you do social distancing in a camp where thousands of men are living side by side? None of the usual advice works in a labour camp”, said Vani Saraswathi, the associate editor of migrant-rights.org, who lived in Qatar for 17 years. Besides, the Qatari authorities did not allow the migrants to even step out to get medical care.

On 19 June, Government of Nepal started the repatriation process of its nationals stuck in Qatar. Besides, the authorities also brought back dead bodies of Nepalese migrant workers from Qatar who died of the Covid-19. The evacuation of corpses via charter flights was carried out as part of the repatriation drive conducted from June 11 to June 25.

Nepalese Government put the repatriation of the dead bodies on hold during the nationwide lockdown, as the authorities sealed bordered and suspended domestic or international flights in order to contain the spread of COVID-19 in country. Whereas the permission was granted to only limited charter flights for case specific repatriation and transport of medical supplies from China.

The oil rich country has a history of hiding its mistreatment of migrant workers. Last year, Nepal’s Labour Ministry confirmed death of over 1400 Nepalese workers trapped in Qatar. In a shocking investigative report, carried out by the Guardian months later, it was revealed that ‘hundreds of migrant labourers in the World Cup host nation die each year, with the majority of the fatalities attributed to heart attacks or “natural causes” by the Qatari authorities’. Many died due to what is called “sudden death syndrome” as they work under fatal levels of heat stress, toiling in temperatures of up to 45C for up to 10 hours a day. The report added that to hide the deed, Qatar authorities did not perform postmortems, despite recommendations from regime’s lawyers. We would be really naive to expect the regime to submit post-mortem report of deceased migrants in the age of deadly Covid-19.