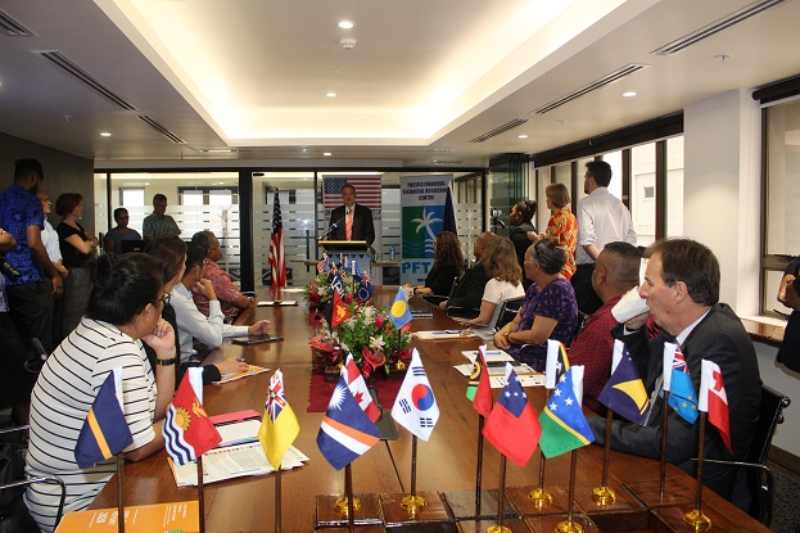 US Embassy in Fiji, Kiribati, Nauru, Tonga, and Tuvalu In Charge d’Affaires Tony Greubel made an announcement on February 23 that the USA is making a contribution of US$2 million (FJ$4.07 million) to the Pacific Financial Technical Assistance Center (PFTAC). The recent agreement and joint letter signed by IMF (International Monetary Fund) and the US has made the country 7th donor in the fifth phase of PFTAC operations.

CDA Greubel said, “The United States is very pleased to become, for the first time, a donor to the Pacific Financial Technical Assistance Center (PFTAC), and to join other members and donors in supporting this key regional entity working to promote the macroeconomic stability and development of its Pacific islands members. As a Pacific nation, the United States has a strong and enduring interest in the security, stability, and prosperity of our close partners and neighbors in the Pacific.”

PFTAC Center Coordinator David Kloeden, CDA Greubel, and Reserve Bank of Fiji Deputy Governor Esala Masitabua spoke at the event at which the importance of PFTAC in the Pacific region was discussed.

The announcement originally was a part of the US announcement that was made in October 2020 that extended a fund of over $200 million for new projects under Pacific Pledge, which is a commitment by the US to the Pacific through the U.S. Indo-Pacific Strategy.

PFTAC was founded in 1993 to promote and boost macro-financial stability in PICs (Pacific Island Countries) that would provide technical assistance and training to people in these nations. PFTAC was one of the first regional centers of IMF to provide assistance.