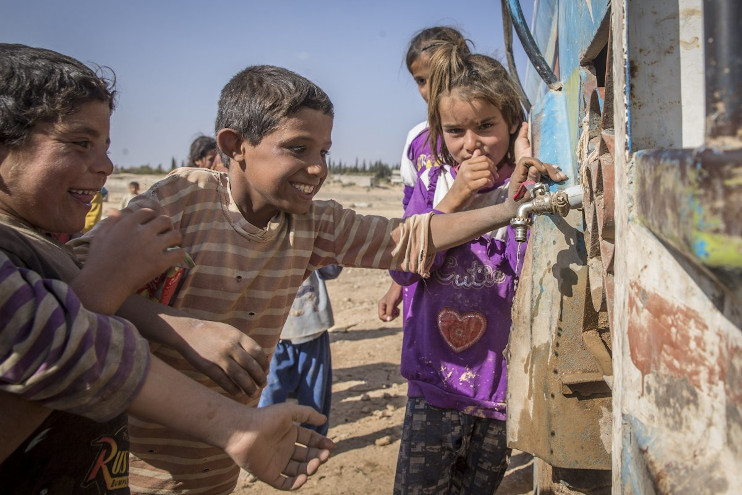 Unprecedented levels of displacement and harsh conditions of civilians in the Syrian Arab Republic.

The armed conflict in the Syrian Arab Republic is far from being over, as the types of human rights violations are constantly increasing, according to what the inquiry commission announced in its report. After nearly nine years, men, women and children, still face unprecedented levels of suffering and pain.

Civilians who have been forcibly displaced through “reconciliation” agreements or fled battles are now living in ever-shrinking areas in Idlib Governorate and western Aleppo, under the rule of the HTS terrorist group.

As part of its declared battle against terrorism, pro-government forces launched air and ground attacks in southern Idlib, killing and injuring scores of civilians and destroying civilian infrastructure, including markets and camps for the displaced, particularly hospitals. This includes indiscriminate attacks against protected infrastructures and the use of cluster munitions.

The ongoing air strikes in parts of southern Idlib left civilians no choice but to flee. The majority of the 948,000 civilians displaced in the northwest are women and children, with thousands living in the open during the harsh winter months. The crisis in Idlib – where more than three million people are currently stranded – is turning into a humanitarian disaster, while families continue to flee and children freeze to death.

Armed groups carried out attacks on government-controlled areas, including south Aleppo, causing casualties and causing fear to the civilian population, causing many of them to leave. In the troubled areas of Idlib governorate, HTS terrorists have tried to tighten their grip on the already besieged population by arbitrarily detaining activists, journalists, and other individuals because of their public objection. The Headquarters for the Liberation of Al-Sham continued to recruit and use children to participate actively in hostilities.

The progress of the Turkish forces and the Syrian National Army, under the name Operation Peace Spring, came after the sudden withdrawal of US forces in early October. The hostilities caused the displacement of more than 100,000 people within 24 hours.

In besieged areas, such as Eastern Ghouta and Homs, conditions of return have remained largely absent with the presence of important obstacles for civilians to claim their property. In areas where “reconciliation” agreements were previously imposed, widespread checkpoints spread fear among the civilian population and restrict freedom of movement and access to basic services.

The gender roles and the inequalities that underlie them have increased and amplified the direct impact of human rights violations on Syrians from all backgrounds. In the Afrin sector, women, especially women from specific religious and ethnic communities, were affected negatively by the conflict. “Women and girls belonging to the Kurdish and Yazidi minorities have suffered from restricting their movements and have been subjected to harassment when venturing out. These actions undermine the ability of women to participate and contribute effectively to their societies,” said Commissioner Hani Megally.

All warring parties continue to ignore or deny the principle of protection, including guarantees of continued and unimpeded humanitarian assistance to vulnerable civilians. According to Commissioner Karen Koning AbuZayd, “The urgent priority of all civilians must be the urgent access to the food, water and medical assistance they need. Facilitating access for observers and protection actors is essential to protecting the rights of civilians.”

The report concludes with a number of recommendations for the government, warring parties, and the international community to improve protection of civilians. “I urge all parties of the conflict to enter into a dialogue based on goodwill, put an end to this tragic conflict and allow unimpeded delivery of aid and humanitarian assistance to all those in need immediately,” said Commission Chair Paulo Sergio Pinheiro.

The report of the commission is scheduled to be presented on March 10th, during an interactive dialogue at the Human Rights Council.