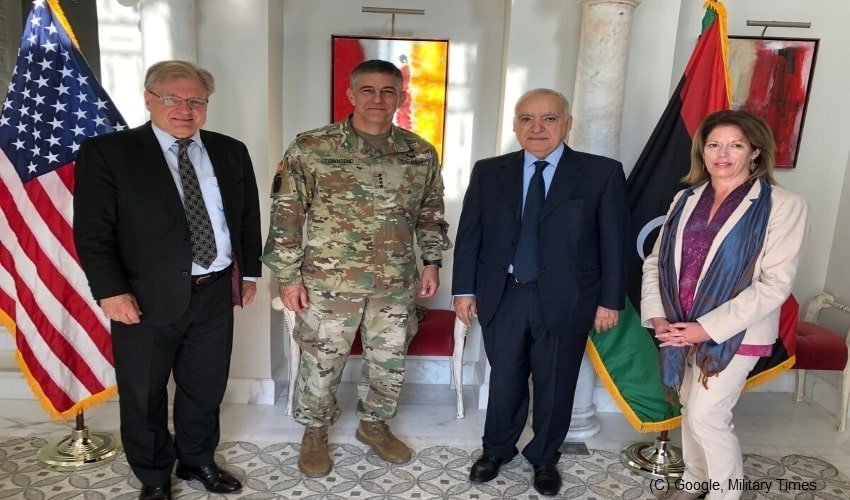 Over the past twelve months, the United States has strengthened its diplomatic action in Libya.

The Embassy of the United States in Libya has confirmed Washington’s support for the city of Sirte four years since the liberation from ISIS. “Four years after the liberation of Sirte from ISIS, the U.S. Embassy honours the bravery and commitment of the people of Sirte and all Libyans who fought and sacrificed so much to rid their country of the scourge of ISIS occupation”. The Embassy says in an official statement, stressing that today the U.S. through its agency USAID continues to support recovery in Sirte.

The agency is providing equipment to restore public services, clear rubble, and revive community life. Last week, USAID gave heavy equipment and trucks to the coastal city of Sirte to aid in clearing rubble and improving sewage and water services for Sirte residents. According to the same statement, this progress can serve as a model for rebuilding Libya as a whole, complementing the de-escalation of opposing forces that needs to begin immediately in central Libya.  The U.S. embassy in Libya recalled that since 2016, the American Government, through the U.S. Department of State and United States Agency for International Development, has provided over $25 million in stabilization and early recovery efforts to consolidate the defeat of ISIS and build a peaceful future.

Amb. Norland: “Today in #Misrata, I encouraged dialogue and momentum that will lead to elections next December, in support of a better future for all Libyans.”https://t.co/RuJyoUjpZ3 pic.twitter.com/bNAyCLA1Wt

Over the past twelve months, the United States has strengthened its diplomatic action in Libya. They have started negotiations with all parties to reach a permanent ceasefire, managing to calm down the main regional actors involved: United Arab Emirates, Egypt, and France on the side of General Khalifa Haftar, Italy, Turkey, and Qatar with the executive of Fayez al-Serraj. Recently, Secretary of State Mike Pompeo harshly criticized Russia, accused of destabilizing the entire region and hiding its actions through disinformation campaigns and fake news. Moscow has sent thousands of pro-government Syrian mercenaries to Libya, in opposition to the same number of Turkmen fighters sent from Afrin to Tripoli from Recep Tayyip Erdogan’s Turkey. The Libyans and the UN Security Council have repeatedly called for all foreign forces to leave Libyan territory. Up to now, no concrete steps have been made in this sense.

Due to the lack of legitimacy and territory control of the Tripoli-based Government, terrorist groups exported their activities in Libya. The self-proclaimed Libyan National Army (LNA) under Marshall Haftar’s leadership liberated the eastern region from ISIS, which had turned Derna and Benghazi into its strongholds between 2014 and 2015. On the other hand, the forces affiliated with the Government of Tripoli launched the al-Bunian Al-Marsus operation in 2016 which made it possible to definitively defeat ISIS in the city of Sirte, which was the birthplace of Colonel Muammar Gaddafi. However, various extremist groups and armed militias outside state control remain active in the country.

Why Workers Across The World Are Joining An Anti-Amazon Campaign?