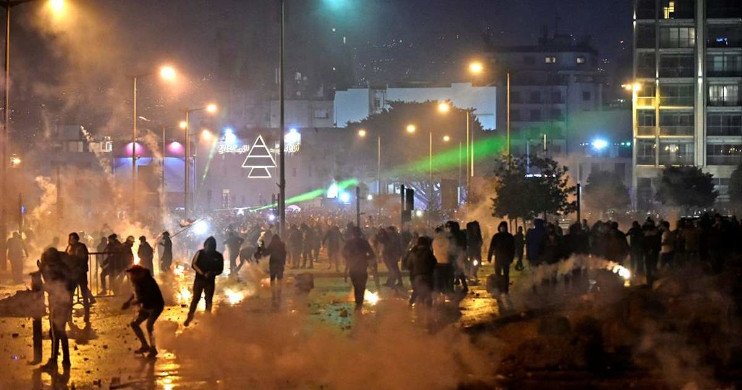 The United Nations High Commissioner for Human Rights, expressed concern over the increased frequency of violent clashes between protesters and security forces in Lebanon over the past days.

“Some protesters have resorted to violence to express their grievances, and the security forces have sometimes responded by using unnecessary or disproportionate force,” UNHCR spokesperson Marta Hurtado told reporters in Geneva.

She referred to the weekend events, as protesters in Beirut attempted to storm the parliament building and threw stones, traffic lights, fireworks and other debris on the Internal Security Forces, and ATMs, bank offices and shops were vandalized and public property destroyed.

“According to reliable sources, at least four young men were injured by rubber bullets at close range, causing permanent damage to their eyes,” the commission said.

According to data received from the Lebanese Red Cross and Civil Defense, at least 377, 142 of whom were law enforcement, were wounded.

The Regional Office for Human Rights in the Middle East and North Africa notes that 45 people were arrested over the weekend, most of whom were released. Some protesters reported that they were severely beaten during their detention and during the investigation.

“Law enforcement forces should adhere to international rules and standards related to the use of force, especially the principles of legality and proportionality,” the commission said. At the same time, UNHCR welcomed the statement of the Commander of the Internal Security Forces, who recognized the importance of restraint when confronting demonstrators and the need to protect journalists and peaceful protesters.

The Commission stressed the right of citizens to participate in public affairs and draw up all decisions that affect their lives, including the peaceful gathering to express their concerns. “The right to freedom of expression, opinion, peaceful assembly and participation are all essential pillars of a democratic society, but at the same time protesters must exercise this right peacefully and assemble without resorting to violence.” A UNHCR spokesperson called on all parties to do their utmost to reduce escalation, adding:

“We urge the authorities to make efforts to initiate a meaningful dialogue that includes all segments of society. We call on the authorities to conduct prompt, thorough, independent, transparent and impartial investigations into the alleged use of force violations committed during the outbreak of violence and abuse during the investigation and arrest period. Victims and their families have the right to justice, truth and compensation.”

Finally, a spokeswoman for the Commission called on the political parties to respond to the legitimate aspirations of the people, and to accelerate their efforts to form a stable, respectful and comprehensive government capable of addressing the grievances and demands of the people who suffer from the effects of the acute and deep economic crisis.

On the other hand, the International Support Group for Lebanon met at the ambassadorial level in Beirut today.

This meeting comes six weeks after the group’s expanded meeting in Paris on December 11. The group said in a statement that it notes “with great concern the continuing absence of an effective government in Lebanon, noting that it is necessary to manage a number of worsening crises and meet the demands of the Lebanese people.” The group expressed concern about the situation, which is characterized by escalating violence.

The group pointed out that “the longer the absence of an effective and credible government capable of meeting the aspirations expressed by all Lebanese, and having the ability and credibility necessary to implement a set of radical economic reforms, and committed to neutralizing the country from regional crises and tensions, the greater the suffering faced by the Lebanese people and the greater the risks Security and instability in the country. “