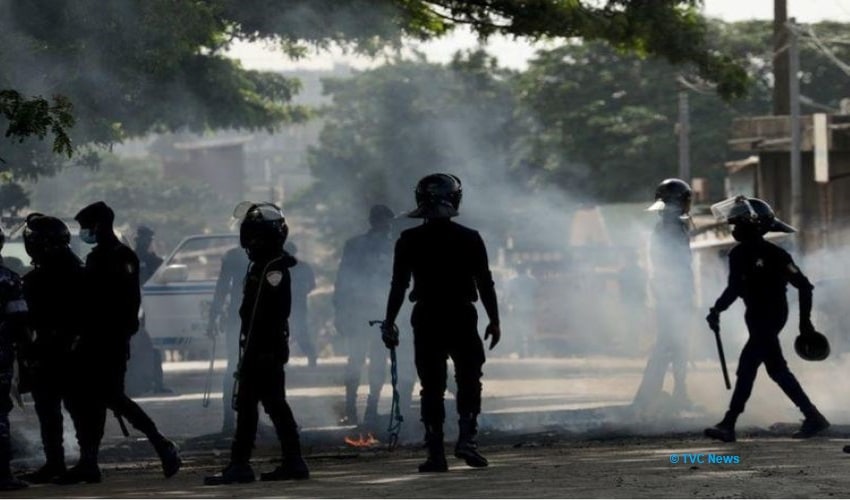 In the past week, Cote D’Ivoire has seen protests against President Alassane Ouattara’s decision to stand for a third term in the upcoming presidential elections after the sudden death of his expected successor. Demonstrators took to the streets protesting this move despite the country’s record of clamping down peaceful assemblies under a strict criminal code. But not only were these protestors met with tear gas, violence and arrests by security forces, but they were also subjected to attacks by armed men, apparently working with impunity.

According to a report released by Amnesty International, police officers seem to have allowed groups of men, some of whom were armed with machetes and heavy sticks, to violently disperse protestors in several pockets of the city. The report quotes a police officer who was duty at one of these locations where protests were happening. He said when the police arrived on the spot they were confronted with a group of young people who had raised barricades and were chanting slogans. Outnumbered, the police tried to clear the road but meanwhile, two minivans carrying dozens of young men arrived. They also had men on motorbikes escorting them. After having a word with the police chief who was at the spot, the armed men unleashed themselves on the crowd, brandishing their weapons and chasing the protestors. At least one of them was stabbed. When the police left, the armed men also followed them out in their vehicles.

The police source said this had been repeated in several locations as he heard his colleagues talking about how this group of men “helped” the police quell protests. Several videos have emerged on social media showing men arriving in minivans and attacking protestors in full view of the police, who watched on passively. Witnesses say how sometimes the armed men arrived even before the police. They seemed to have prior information about the location of protests and reached there to disperse the crowds violently and removing barricades. The police who arrived later did not arrest any of the attackers though at least 70 protestors were arrested for disrupting public order, violence against law enforcement officers, destroying property and incitement to revolt. Amnesty International has condemned these incidents saying that the police’s collaboration with these untrained and unaccountable men was “extremely worrying”. Cote D’Ivoire has a history of using unofficial “law enforcement” agents who have perpetrated human rights abuses in the past, the statement said, and the authorities must put a stop to this right away. The human rights body also called for an investigation into this matter, including police complicity.

I’ve been surfing on-line greater than three hours lately, but I never found any fascinating article like yours.
It is beautiful value enough for me. In my opinion, if all web owners and bloggers made just right
content as you probably did, the web shall be a lot more helpful than ever

I’ll immediately grasp your rss feed as I can’t to find
your e-mail subscription hyperlink or newsletter service. Do you’ve any?
Kindly let me recognize in order that I could subscribe.
Thanks. It’s appropriate time to make a few plans for
the long run and it is time to be happy. I have read this publish and if I
could I desire to counsel you few fascinating issues
or advice. Maybe you can write next articles regarding this article.

I desire to read more things about it! Way cool!
Some extremely valid points! I appreciate you writing this article and also the rest of the website is
extremely good.

Nice weblog here! Additionally your website quite a bit up very fast!
What host are you the use of? Can I am getting your associate hyperlink

I have been browsing on-line greater than three hours lately,
but I by no means discovered any interesting article like
yours. It’s beautiful price sufficient for me. In my opinion,
if all webmasters and bloggers made just right content material as

What’s up, I check your blog regularly. Your humoristic style is awesome, keep it up!

I think that is among the such a lot vital information for me.
And i am satisfied reading your article. However want to statement on some basic issues, The website taste is wonderful, the articles is really
excellent : D. Good process, cheers

Its like you read my mind! You appear to know a lot about this, like you wrote the
book in it or something. I think that you could do with a few pics to drive the message home
a bit, but other than that, this is wonderful blog.

A great read. I will certainly be back.

Thanks for your personal marvelous posting! I certainly enjoyed reading it, you could be a great author.I will remember to bookmark your
blog and will often come back later in life.
I want to encourage that you continue your great job, have a nice
day!

I like this weblog very much so much fantastic info.