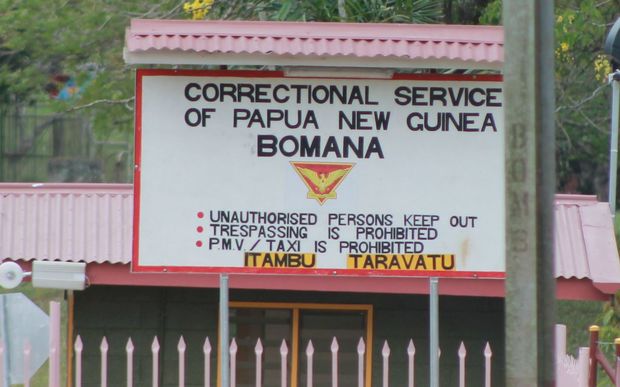 Leaked pictures from inside Papua New Guinea’s Bomana immigration detention centre have given a glimpse of where up to 20 asylum seekers still remain locked up by PNG authorities, despite widespread concerns for their health, welfare and legal rights.

Despite around 30 men being released after signing agreements to return to their country of origin, Guardian Australia understands all remain in PNG.

In August PNG authorities arrested 52 men who had previously been detained on Manus Island on behalf of the Australian government after seeking asylum by boat.

Of the 52, there are believed to be just 18 left inside the prison. The others have all been removed, having signed agreements to be voluntarily returned to their country of origin. They are being accommodated in Port Moresby ahead of deportation, but none have left, and few are willing to speak about the Bomana prison for fear of being returned.

Having fled and sought asylum, then spent up to seven years in Australia’s offshore detention system, multiple former detainees have said it was Bomana which broke them.

In the months since they were detained, numerous detainees self-harmed or attempted to take their own lives. Some have been hospitalised. One Iranian asylum seeker described the conditions in Bomana as “designed to torture people”.

The first public pictures from inside the centre, taken late last year and obtained by Guardian Australia, reveal the living arrangements for those who were held and those who remain.

According to the photographs and interviews with people familiar with the facility, Bomana’s immigration detention centre is divided into five compounds – Karanas and Diwai on one side of the centre, and Raun Wara, Kunai and Balus on the other.

There is no shade and the compounds which each hold a few dozen demountable rooms are separated by fences.

In the rooms – which are only air conditioned in one compound – men sleep on a hard plastic mattresses with no pillow.

Food is minimal. According to former detainees there are frequent announcements over the loudspeaker and unannounced room searches by guards, including by some Australian employees.

The Australian government has maintained it has no involvement or visibility inside Bomana, and there are suggestions that the PNG government’s approach has caused concern with Australian authorities.

Detainees determined to have behavioural issues are held in solitary conditions in Karanas, a managed accommodation area. It has been alleged to Guardian Australia that men are sometimes sent to Karanas as punishment.

The Diwai compound is a supported accommodation area designated for people with mental health issues requiring further support, but Guardian Australia was told it was also used as temporary detention for other people being deported.

The other three compounds, Raun Wara, Kunai, and Balus, are on the other side of the facility, but still separated from each other by fence.

The men who were taken to Bomana had either had their asylum claims rejected or were never assessed, and they were deemed non-refugees. Ahead of their detention in the Australia-funded facility, the men were ordered to surrender their mobile phone, any medication, and to pack up their personal property.

They were then taken to Bomana and denied access to phones, lawyers and, allegedly, adequate medical care. Critical cases were taken to hospital, but no further information was available.

It was later revealed that at least a dozen were very ill and had been at various stages of approval for medevac to Australia, including nine who had been approved. That process stopped upon their detention.

In recent months groups of detainees have been released and housed in Port Moresby, after signing agreements to be deported back to their home countries.

Guardian Australia approached the PNG immigration department and minister with questions but received no response.

Graham Thom, a spokesman for Amnesty International Australia, said it was “frightening” that men continued to be detained in Bomana.

“Given the small number left, we see no reason why they’d keep this centre open and those individuals detained,” Thom said. “The men [who have been released] are clearly not going anywhere anyway.”

Thom welcomed that the majority of the men had been released but he said Amnesty had major concerns it was only because they had agreed to return home, “when clearly what we’re being told is they still have grave fears for their safety”.

“If the only way you get out is putting your life potentially at risk, then this is a serous breach of PNG human rights obligations.”If you want to see more news follow us Human Rights Latest News

Turkish Parliament to introduce ‘marry-your-rapist’ bill. Is it an easy pass for rapists?