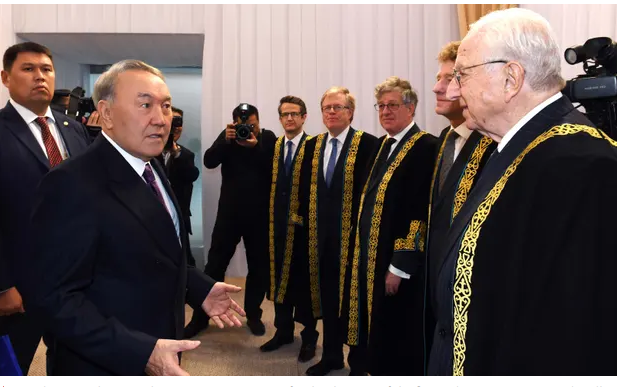 The new head of the UK’s independent press regulator has been criticised for providing legal assistance to an authoritarian regime notorious for the arbitrary arrests of journalists, shutting down of newspapers and state censorship.

Lord Faulks QC, who became chair of the Independent Press Standards Organisation (Ipso) this month, was among a number of the judiciary hired in 2018 to help run a commercial court in Kazakhstan under the authoritarian leadership of the then president, Nursultan Nazarbayev.

Critics say the central Asian republic is plagued by corruption and human rights abuses and, in sharp contrast to Ipso’s ambition to “maintain freedom of expression for the press”, is classified as among the worst countries in protecting the media from interference.

The latest assessment by Reporters without Border ranked Kazakhstan 158 out of 180 countries, chastising its government for jailing journalists, controlling the internet and presiding over a “heritage of censorship”.

Human Rights Watch, in its recent annual update, cited “54 detentions, arrests, convictions, or limits on the freedom of journalists” between January and September 2019.

Hugh Williamson, director of Human Rights Watch’s Europe and central Asia division, said it was important that Faulks, a peer and former justice minister who was appointed a justice at a commercial court in Kazakhstan’s capital, Nur-Sultan, understood that accepting such a role meant he risked legitimising the regime. “Kazakhstan imposes severe limits on freedom of expression. We would expect him to be aware of the dangers of his role being used to legitimise an authoritarian government,” said Williamson.

Steve Goodrich, senior research manager at Transparency International UK, which campaigns against corruption, echoed the concerns. “Although some silks might see opportunities for reform when an autocrat asks for their assistance, they should be cautious that their work does not merely serve to launder the reputation of a corrupt and repressive regime,” he said.

In 2018, along with eight other judges and senior lawyers from the UK, Faulks began helping to run the Astana international financial centre court, which refers to the capital’s previous name. Faulks was contacted for comment on Friday but did not respond and it is not clear if the 69-year-old, who served as justice minister for three years from 2013, is still working for the Kazakh authorities.

When his role as chair of Ipso was first announced last year, Faulks said: “The freedom of the press is a crucial part of our democracy.”

It is also not known how much Faulks was paid for his work which is understood to have involved five visits a year.

Williamson said: “He is likely to be getting lucrative consultancy fees for this work. Kazakhstan is very keen on attracting senior international figures to polish its image.”

Other notable figures among the eight-strong team of the judiciary include the former most senior judge in England, Lord Woolf, who was appointed head of the Kazakhstan court.

Williamson also said the court appeared not to be an attempt to raise legal standards in a country where last year’s successor to Nazarbayev, Kassym-Jomart Tokayev, has made little difference.

Analysis from Reporters Without Borders, which noted press freedom in Kazakhstan is declining, found that while most of the major opposition national newspapers were banned in 2013, the remaining few “are collapsing under the impact of judicial proceedings”.

The Human Rights Watch report also highlighted direct attacks against the press, citing eight incidents including during a press conference in July last year hosted by a human rights group in which five journalists had equipment damaged or stolen. A radio station complained of repeated interference in its work, including attacks with pepper spray.

Woolf, who was lord chief justice of England and Wales from 2000 until 2005, was also contacted for comment. Link us for more news about Human Rights Latest News