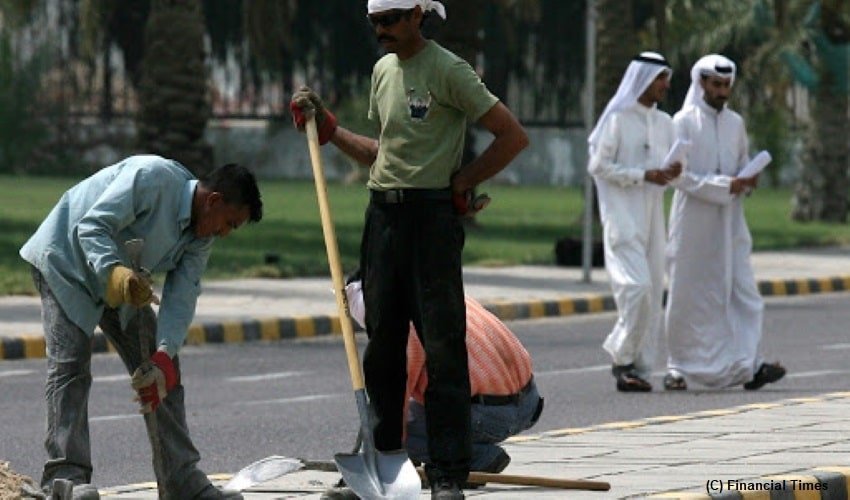 A new law to drastically reduce the number of foreign workers within a year: this is what the Kuwait parliament unanimously decided

A new law to drastically reduce the number of foreign workers within a year: this is what the Kuwait parliament unanimously decided yesterday, Bloomberg reported. That of foreigners is a central issue in the small Gulf country if we consider that the immigration of skilled and unskilled workers over the decades has meant that their number reached the current 3.4 million out of the total 4.8 of the population.

Kuwait’s population is currently 70-per-cent #foreign #workers. The government must act to cut the number of foreign nationals living in the country in the next 12 months so that they reduce to 30 per cent of the population. https://t.co/MVUa7zAsMK #expats #IPMI

In addition to decreasing the foreign presence, the law will also provide for a series of procedures that aim to give more jobs to those who have Kuwaiti citizenship (only 30% of the population). The consequences of the Coronavirus are at the basis of yesterday’s decision of the parliament, which leading to a decrease in oil prices, has effectively put the national economy in crisis.

The crisis, by increasing unemployment, has increased domestic demand for more jobs for Kuwaitis only at the expense of foreigners. Already in June, the Kuwaiti Prime Minister had proposed a maximum limit of 30% of the total population for foreigners.

Then in July, the National Assembly passed a law, which should come into force this month a few weeks before the parliamentary elections scheduled for November, according to which Indians (1.45 million, 30% of the population) should not reach the 15% of the total residents of the country. But every nationality of foreign workers has its quota to respect: for example, Egyptians, Filipinos and Sinhalese, must not exceed the limit of 10% each. Bengalis, Pakistanis, Nepalese, and Vietnamese instead of no more than 5%.

Not only that: the law also imposes a limited number of foreigners that a company can recruit every year based on their specializations. These provisions will force around 800,000 people to leave the country in what will be a real forced mass exodus. But the economic consequences of the Coronavirus have led to similar situations in other countries in the region: according to a study by the Jadwa Investment company, for example, in Saudi Arabia, it is believed that about 1.2 million foreign workers could return to their states.

The problem, however, is also of those who remain to work in the Gulf countries. That is the case of domestic workers in Qatar who continue to suffer abuse even though Doha introduced a law in 2017 that limits the hours of employment, introducing mandatory daily breaks and guaranteeing one day of rest per week and paid holidays for those who work in the homes of their employers. According to Amnesty International, the abuses derive from a series of factors: lack of controls and above all aspects of the sponsor system (known as Kafala) active in the region, which gives employers excessive power over employees.

According to the British NGO, the most common form of violation of rights that has emerged is represented by the obligation to work beyond the legal limit of 10 hours a day for six days a week. Some workers complain of verbal offenses and physical abuse. One woman told Amnesty that she got spit and kicked in the back from her employer. Something even more serious would have happened to five women who report having suffered sexual harassment (from groping to rape).

If Qatar wants to protect domestic workers from exploitation it must send a strong message: abuses are unacceptable.

Steve Cockburn, the head of Amnesty for social and economic justice

“We therefore invite the local authorities – Cockburn added in a statement – to take serious steps to ensure full implementation of the law that guarantees strict control mechanisms and takes serious steps against violent employers”.