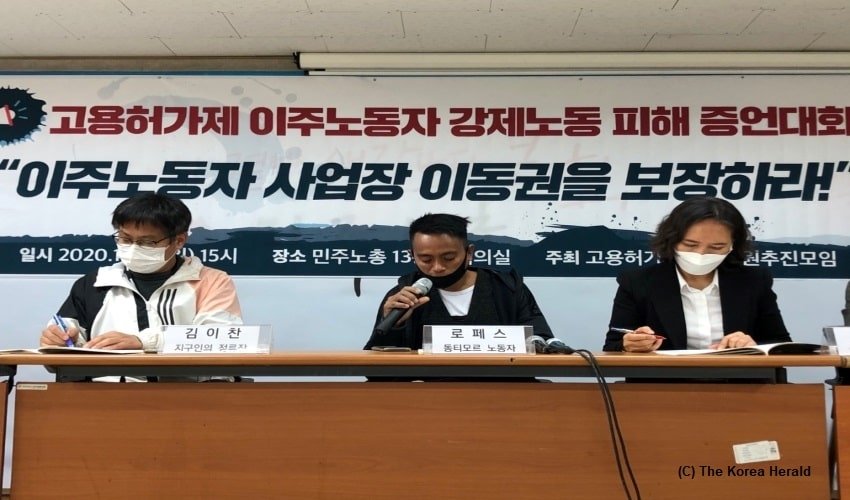 Migrant workers in Korea denounce inhuman conditions that the local newspaper “The Korea Herald” defines as modern slavery. The 16-year-old system is creating an uneven playing field for migrant workers, already vulnerable to abusive practices and even “slave-like” mistreatment by employers. The Korean law effectively bans workers from changing workplaces and this make migrant workers a modern-day slave. During a press conference in Seoul, on Sunday, a migrant fisherman Lopes M., endured appalling working conditions and human rights violations on a small island for years.

During anchovy season, Lopes even went to sea twice a day. He had to dry anchovy and take care of fishing nets, working for about 15 to 20 hours a day for few moneys in exchange. He was virtually locked up and isolated on Gaeyado, off the coast of Gunsan, as he was not allowed to leave without permission from his employer. He was dispatched to other workplaces several times, in breach of his employment contract. He earned about 2 million won ($1,765) per month, which he found out only recently because his employer had kept his bankbook.

Lopes M. first came to Korea in July 2014 and worked for his person in charge on Gaeyado for four years and 10 months. He obtained a second work permit in 2019, valid for another four years and 10 months, on the condition that he remain with the same owner. He escaped from the island in September this year and has been staying at a shelter ever since.

In July, the National Human Rights Commission of Korea spent an inspection into the working conditions of 63 migrant fishing crew members on islands off the west coast and found they were working 12 hours a day with less than an hour for breaks. Some 90 percent of the workers said they’d had no a day off for a year. Their average monthly income was about 1.87 million won, much lower than the monthly minimum wage of 3.08 million won. Six migrant workers had their passports seized and 23 where their bankbooks were taken away.