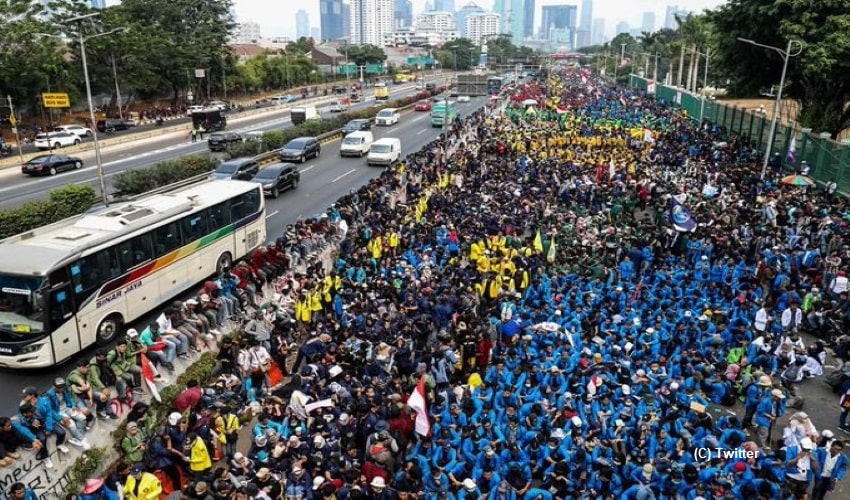 Indonesian police on Wednesday detained hundreds of protesters amid the ongoing demonstrations in the country against the passing of a controversial job creation law that weakens workers’ rights and environmental regulations.

Indonesian police on Wednesday detained hundreds of protesters amid the ongoing demonstrations in the country against the passing of a controversial job creation law that weakens workers’ rights and environmental regulations. As per media reports, violent clashes broke out between protesters and the police on Tuesday night which continued through Wednesday. Indonesian police also resorted to using water cannons and tear gas to control the demonstrations. Several protesters were reportedly injured during the clashes and were admitted to the hospital.

Over the past few days, thousands of Indonesians have been carrying out protests and strikes across several cities, demanding the government to revoke the “omnibus” jobs creation law. Workers unions and protesters are professing that the law is lopsided in favour of businesses and will harm both workers and environment in the process. The Indonesian government, on the other hand, has asserted that new legislation will support the economic recovery of the Southeast Asia’s largest economy in the aftermath of COVID-19 pandemic.

Championed by President Joko Widodo, the “omnibus” Job Creation bill was passed by the Indonesian Parliament on Monday with the support of seven out of nine parties. Reportedly, the newly-passed law amends around 1,200 provisions in more than 70 existing laws concerned with workers’ rights and environmental regulations. Amid the raging protests against the bill, the government has said that the law will speed up the economic recovery and attract more investors into the country.

In an interview with BBC in January, Indonesian President Joko Widodo had said that the law pertains to removing red tape and opening the economy to increased foreign investment. Government officials have also affirmed that the law will ease rigid labour laws and simplify environmental regulations in order to improve the country’s investment climate and create more jobs for the unemployed.

Critics of the law have exclaimed that it is pro-business as it removes crucial labour protections and dilutes necessary environmental rules threatening the country’s tropical forests. The law brings unprecedented changes to labour regulations in the country, including reduction of mandatory severance benefits and abolition of sectoral minimum wage. Businesses will have the provision to reduce the weekly offs of the workers from two days to one. As per media reports, a draft version of the bill also states that mandatory paid leave for weddings, childbirth, weddings, baptism and bereavement will be removed, along with menstrual leave for women employees.

It’s in fact very complicated in this full of activity life
to listen news on Television, thus I only use web for that purpose, and obtain the most up-to-date news. https://vanzari-parbrize.ro/parbrize/parbrize-fiat.html

Have you ever thought about adding a little bit more than just your
articles? I mean, what you say is fundamental and all. However imagine if you added some great images
or videos to give your posts more, “pop”! Your content is excellent but
with images and video clips, this site could definitely be one of the most beneficial in its field.
Superb blog! https://anunturi-parbrize.ro/index.php?cauta=parbriz+irisbus

I’d like to thank you for the efforts you’ve put in writing this site.
I really hope to check out the same high-grade blog
posts from you later on as well. In fact, your
creative writing abilities has inspired me to get my very own blog now
😉 https://vanzari-parbrize.ro/parbrize/parbrize-jeep.html

My family members every time say that I am wasting my time
here at net, however I know I am getting know-how daily by reading such nice
articles or reviews. https://vanzari-parbrize.ro/parbrize/parbrize-mitsubishi.html

What a material of un-ambiguity and preserveness of precious know-how regarding unpredicted
emotions. https://vanzari-parbrize.ro/parbrize/parbrize-kia.html

I used to be suggested this web site through my cousin. I’m no longer sure whether this put up
is written via him as nobody else recognize such special about my trouble.
You are incredible! Thank you! https://vanzari-parbrize.ro/parbrize/parbrize-dacia.html

I surprise how so much effort you set to make
the sort of fantastic informative site. https://vanzari-parbrize.ro/parbrize/parbrize-mercedes.html