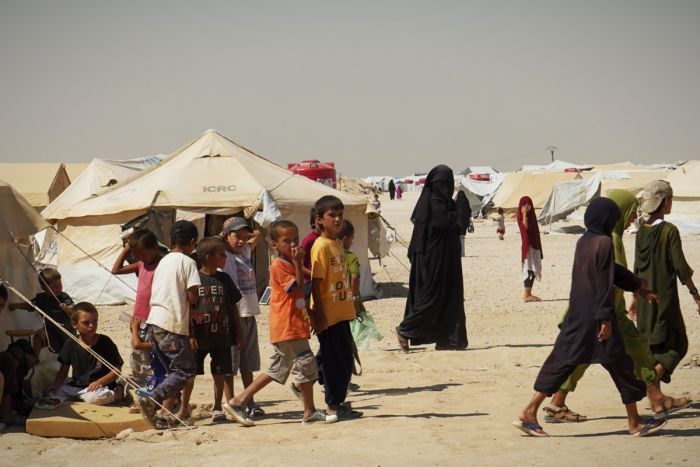 In the far east of Hasaka, in northern Syria, there’s one of the most dangerous camps in the world, which houses families of ISIS terrorist fighters, under Kurdish protection. Every now and then, the “HAWL camp” sees escape attempts by these families.

What is new today is that reliable sources have informed the Syrian Human Rights’ Observatory that the internal security forces, “the Asayish” of the Kurdish Protection Forces, have thwarted the smuggling of women from the families of ISIS terrorist organization who are within the “Al-Hol Camp”.

According to information, surveillance cameras monitored the escape attempts, and the security forces quickly moved and thwarted the operation.

According to the observatory, the intention was to smuggle 5 women of Russian nationality from the families of ISIS accompanied by 13 of their children, after a woman tried to smuggle them from inside the camp, the smuggler is the administrative official of the relations of the organization’s dead citizens of non-Syrian nationalities’ wife .

In October 2019, elements of the Syrian Democratic Forces in Al-Hol camp foiled an attempt to flee ISIS, and managed to arrest 14 of them, accompanied by 21 children of different nationalities.

Al-Hol camp, 45 km east of the city of Hasaka, is one of the largest camps for self-management, inhabited by more than 74 thousand people, among the displaced, refugees and families of ISIS, women and children, and is considered the most dangerous in the world due to the presence of more than 40 thousand ISIS women and their children.

Children also make up more than two-thirds of this number, as they account for 66% of the population in the camp, and “most of them do not have identification papers,” especially those born on the land of the alleged “caliphate state” according to United Nations reports.

The presence of foreign “ISIS” in Al Hol has added to the complexity of the camp problem, especially since these people still cling to the ideas of the extremist organization until now. Some of them commit daylight violence inside the camp, most of which is related to their victims’ rejection of their extremist ideas.

According to administrative officials in the camp, the crimes of ISIS are repeated from time to time, as they try to kill or punish any woman who does not abide by their teachings, such as wearing Islamic dress and abiding by prayer and its timing.

These women also committed willful killing in several ways, including strangulation or the use of knives and other sharp tools.

In addition, local officials are calling for some international organizations to rehabilitate Al-Hol camp women to reintegrate them into their societies, where the camp is inhabited by thousands of ISIS descendants from various European, Arab, Asian, American and Canadian nationalities. Security forces in the camp prevent extremists from leaving it, while only allowing Syrian and Iraqi civilians to leave the camp. The section in which the ISIS camp is located is called the “migrant section”.