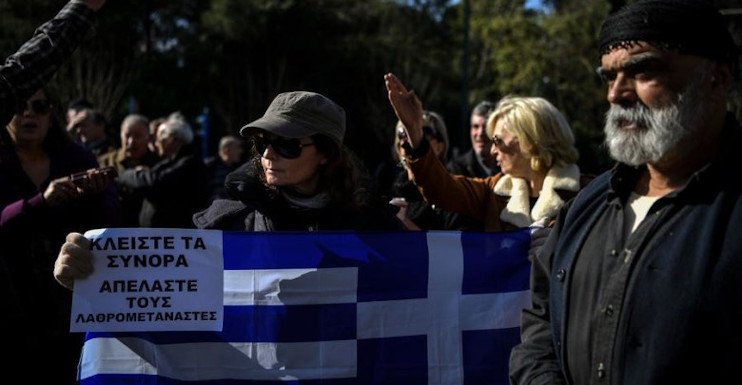 Under pressure of the angry Aegean Islands, the conservative Greek government tightened its policy towards immigrants and put in place plans to build a floating wall that would block ships and immigrant’s detention centers making border transfers. “Alleviating overcrowding on our islands is our top priority”, Immigration minister Nutis Mitarakhi said trying to calm the islanders who intensified their protests in the last 2 weeks. Five years after the massive immigration crisis in 2015, Greece, the first gateway for migrants to Europe, has managed to handle the procedures of around 90,000 asylum applications whose owners continue to suffer today in a country of 112,000 refugees, according to the latest official data. The five islands of the Aegean Sea are the most affected, with migrants continuing to flow daily from the neighboring Turkey.

38,000 people live in overcrowded camps, which should have received only 6,200 people. Temporary tents and shelters multiply on the outskirts of the camps, becoming more like slums, exacerbating anger and hostile reactions to immigrants. No health conditions and food. “It is imperative that as many asylum seekers be transferred to the mainland in the coming weeks, where they will be able to follow asylum application procedures,” said Philip Lockleark, UNHCR Representative in Greece who also asked to “improve reception conditions”. After 9,000 asylum seekers were transferred to the mainland out of 25,000 expected due to resentment of the population, the government of Kyriakos Mitsotakis, elected in July, focused on border expulsions in Turkey and in the countries of origin for those who did not have asylum. The acceleration of the procedures is an indispensable condition: the Greek administration must speed up the processing of asylum applications. The new law, approved in January and implemented despite criticism from NGOs, allows it to do so.

“I think it’s reasonable to fix the files within three months”, Mitarrakhi said. Priority will be given to new arrivals, at the latest 25 days to decide on the first asylum application and 60 days if submitted, those whose application has been rejected will be removed. In addition, it will be possible to revoke the right to asylum in Greece every three years, depending on the situation of the country of origin, according to the decision of the Government. The government also plans to put a floating wall that extends for 2.7 km and 1.10 meters in height to urge refugees not to cross the Aegean Sea. This controversial project infuriated NGOs, which Human Rights Watch considered “illogical and potentially dangerous” to the boats of run-down migrants flying at night. As for Amnesty International, he was warned of this plan, which “raises major concerns about the ability of paramedics to continue rescue operations for people seeking to cut the dangerous sea route to Lesvos”.

Nea Democratia, which has a majority in Parliament, included an attack in the new law against those he considered smugglers and accomplices, listing the names of humanitarian organizations authorized to work with migrants. The Greek government hopes to alleviate at least the anger of the islanders by closing the squalid fields on the islands of Lesvos, Samos and Chios and compensating them by the summer with “closed” centers. But lawmakers and residents demand an immediate and rapid end to overcrowding on the islands and reject a project they consider intended to host more migrants in “prison camps”. “We have accepted a new camp with a capacity of 7,000 people, which could eventually host between 20,000 and 25,000 people,” said Samos Mayor Georgios Stantzos. The capacity of the five new camps is expected to be 20,000 immigrants and NGOs have criticized the project, which they considered “a violation of international asylum law”. Even after crossing the border irregularly, said Philip Lockark of Human Rights Watch. We ask that detention be an absolute exception”. read more articles about human rights latest news