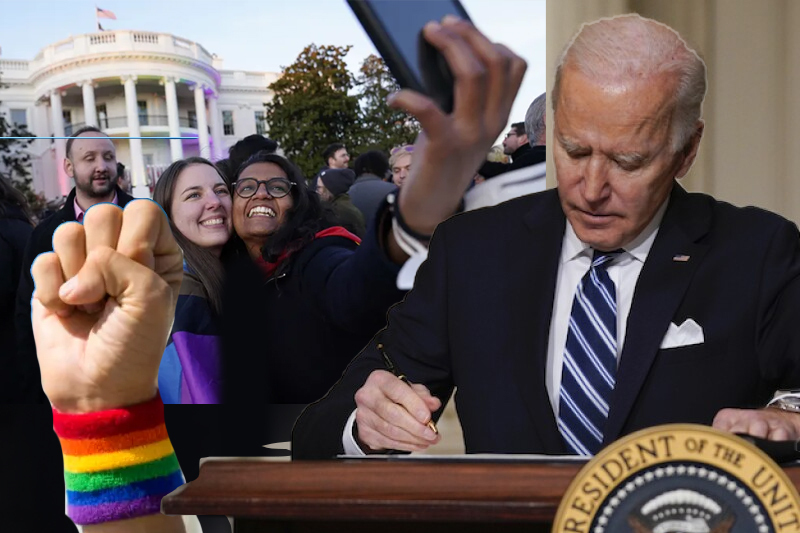 On a chilly afternoon of Tuesday, thousands cheered as US President Joe Biden signed the gay marriage legislation into law, bringing home the human rights for all. “This law and the love it defends strike a blow against hate in all its forms,” Biden said on the South Lawn of the White House. “And that’s why this law matters to every single American.”

Biden signed the Respect for Marriage Act before thousands of invited guests on the White House’s South Lawn. “Marriage is a simple proposition. Who do you love? And will you be loyal to that person you love?” the president asked from the South Lawn. “It’s not more complicated than that.”

“For most of our nation’s history, we denied interracial couples and same sex couples from these protections,” Biden said. “It failed to treat them with equal dignity and respect. And now, this law requires an interracial marriage and same-sex marriage must be recognized as legal in every state in the nation.”

The big moment and a historic win for Biden administration comes almost a decade after Joe Biden in 2012 publicly had endorsed and supported same sex marriage during interview on NBC’s “Meet The Press”, as the Vice President of US. “I am absolutely comfortable with the fact that men marrying men, women marrying women, and heterosexual men and women marrying another are entitled to the same exact rights, all the civil rights, all the civil liberties,” he had said in the interview. And three days later President Barack Obama had himself endorsed the same sex marriage.

The signing of bill ceremony was attended by leaders from both parties as they reflected how far the country’s acceptance has grown. Senate Majority Leader Chuck Schumer, D-N.Y., attended wearing the same purple tie to the ceremony in a symbolic move that he wore to wedding of his daughter Alison, who is along with her wife expecting their first child in the spring. “Thanks to the millions out there who spent years pushing for change, and thanks to the dogged work of my colleagues, my grandchild will get to live in a world that respects and honors their mothers’ marriage,” he said.

Biden during the ceremony also criticized the blazing issues around gender bias and conservative policies. He criticized the “callous, cynical laws introduced in the states targeting transgender children, terrifying families and criminalizing doctors who give children the care they need.”

“Racism, antisemitism, homophobia, transphobia, they’re all connected,” Biden said. “But the antidote to hate is love.”