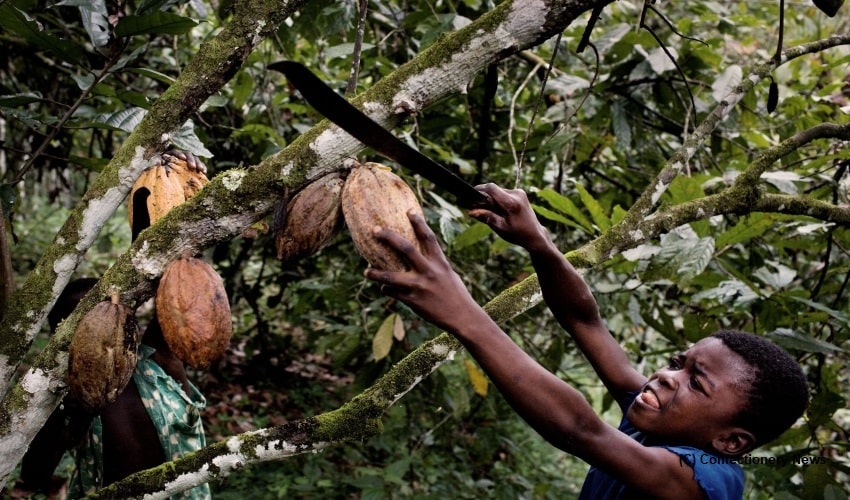 According to the report by University of Chicago’s NORC research group, in 2018-2019 season approximately 43% of children engaged in dangerous activities in growing areas of Ivory Coast and Ghana’s cocoa farms.

A decade has gone by since the $US100 billion cocoa (chocolate) industry had pledged to cut down the child labour in the industry and bring reforms. But recent report initiated by the US government reveals that on contrary the situation is actually worsening.

According to the report by University of Chicago’s NORC research group, in 2018-2019 season approximately 43% of children engaged in dangerous activities in growing areas of Ivory Coast and Ghana’s cocoa farms. This is 30% higher than it was a decade earlier. Overall child labour has increased from 31% to 45% during the same period.

Conclusion: Survey findings show an increase in both child labor and hazardous child labor in cocoa prod in the cocoa growing areas of Ivory Coast and Ghana btw 2008/09 and
2018/19. How can they industry focus like below ⬇️? https://t.co/p2TJrxic4Y

The reports are an embarrassing confrontation for the chocolate and cocoa industry that agreed a decade back to reduce the most horrid forms of child labour by 70% by 2020. The timing is very tricky too, just at the time of crucial elections in West Africa, and also when the US and Europe lawmakers are pressurizing Ghana and Ivory Coast to bring reforms if they are to continue importing beans.

If you take a big pot of boiling water and you pour it into your bathtub, you will be able to measure the change in temperature. If you take that same pot of boiling water and throw it in your swimming pool, good luck seeing a change in temperature. This is something we say throughout the report: you need a bigger bucket of water.

Kareem Kysia, one of the authors of the report

Many chocolate firms have committed to bring in reforms to help eradicate child labour. European Union too has chalked out plan to introduce legislation that would hold companies responsible for human rights abuses and harm to environment. US lawmakers have extended a proposal to ban cocoa imports produced through child labour.

The World Cocoa Foundation (WCF) said that child labpur reducing target was set up “without fully understanding the complexity and scale of a challenge heavily associated with poverty in rural Africa and did not anticipate the significant increase in cocoa production over the past decade.”

There are today still too many children in cocoa farming doing work for which they are too young, or work that endangers them. Child labour remains a persistent challenge in Cote d’Ivoire and Ghana, despite major efforts by the governments, cocoa and chocolate companies, cocoa-growing communities, and development partners.

US Senator Sherrod Brown said that the problem of child labour and forced labour has been in the cocoa industry for two decades and companies aren’t working in the direction of “eradicating these abhorrent labour practices.”

Looking for attaining a better work-life balance? These hacks can be life-saving!