Why Migrant Workers Are Being Singled Out in Russia Again? 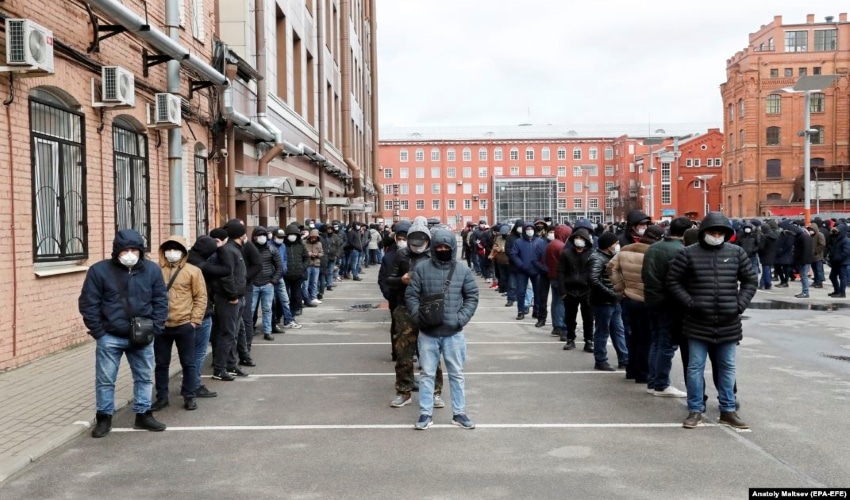 A recent study conducted a survey on migrant workers in Russia and found that 75 percent of surveyed migrants had been either laid off or forced into unpaid leave.

No one is taking onus for the downward economic spiral that is hitting Russian migrant workers. People were laid off in large numbers, especially in Russian industries that employ huge numbers of migrant workers.

A recent study conducted a survey on migrant workers in Russia and found that 75 percent of surveyed migrants had been either laid off or forced into unpaid leave. Over 50 percent had lost all sources of income and are now pushed to make ends meet.

The fact that migrant communities at such times have developed solidarity and mutual support as a collective survival strategy, does not justify their plight. As they know there is no place to go and no way to earn money, they have resorted to quieter ways.

But strangely, this finding has not been used in the right way, and has been distorted, confirmed sources have reported. In August, former Russian PM Dmitry Medvedev and now deputy chair of the Security Council sent off a completely opposite message, suspecting increase in crime rate, due to massive layoffs. The result was that in anticipation of crime rate increase, he proposed stricter migrant visa rules referring to examples in the Middle East. According to the Human Rights Watch, these rules have always been seen as extremely abusive and completely in disregard to human rights of migrant workers.

Mostly Tajik in origin, the migrant population has been kept without food and water on the pretext of a violence instigated by the former.  They had not been given an interpreter and the police refused to contact the Tajikistan Embassy on the request of the captured Tajik migrants. Despite all migrant papers being in place, police has been threatening deportation, if the migrant caught does not pay up a fine. Strangely so, there is history repeating itself. A similar diversion of frustration was seen in 2013, when public lashed out their economic discontent on migrants and the government did only stand like a mute spectator to violence meted at them.