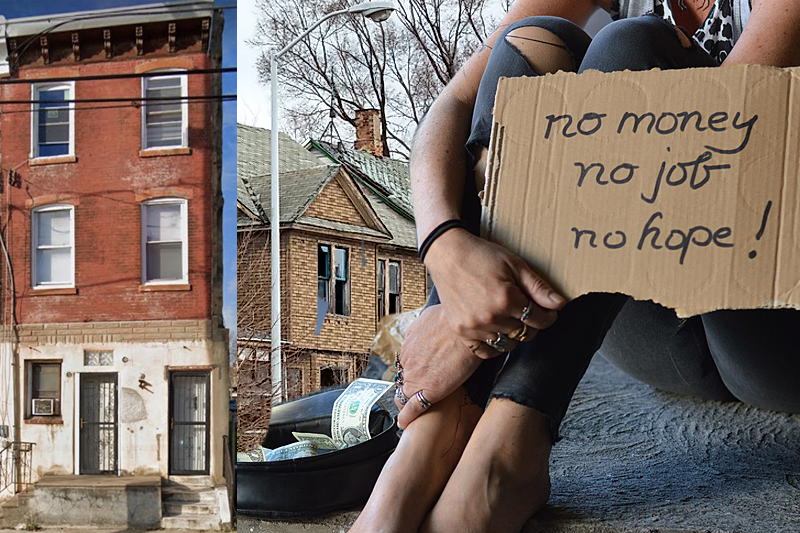 The U.S. Census Bureau reports that the number of individuals living in poverty has fallen for the fifth consecutive year. In 2019, around 37 million individuals, or 11.4% of the total population, were living below the poverty level. Even during the coronavirus outbreak, federal aid reduced poverty rates. According to Supplemental Poverty Measure data, unemployment benefits prevented 5,5 million Americans from sliding into poverty.

The Census Bureau employs a set of money income levels that vary by family size and composition to identify who is poor. These thresholds exclude capital gains and benefits such as public housing, Medicaid, and food stamps. If a family’s total income falls below the poverty line, the entire family is regarded to be living in poverty.

Many experts contend that the U.S. poverty gauge is hopelessly out of date and inadequate as an indicator of financial security. Considering the repercussions of falling on either side of these limits, such as eligibility for various federal assistance programs, the formula is astoundingly straightforward. These limits are determined by tripling the cost of the most basic food plan in 1963, the year they were established, and adjusting for family size and annual inflation. According to this definition, the poverty barrier for a family of four is around $26,000 per year, while the poverty threshold for an individual is $13,000. But the reality of economic hardship does not adhere to the results of a calculation, nor does the lived experience of economic hardship vary from individual to individual.

These criteria do not represent the reality that basic necessities extend much beyond the price of food alone. They do not account for the enormous changes in cost of living based on geography, housing, child care, transportation, medical care, and taxes. Moreover, the notion of family frequently does not reflect modern culture and households.

The poorest city in Illinois is Carbondale!

The typical household in the Illinois metro region of Carbondale-Marion earns $50,953 per year, ranking it forty-first lowest among the 384 U.S. metropolitan areas for which data are available and $18,760 less than the national median household income of $69,717.

Additionally, Carbondale has a higher-than-average rate of poverty. Approximately 17.1% of the population in the metropolitan region lives below the poverty level, compared to 12.8% of all Americans nationally.

In general, salaries tend to increase with educational attainment; however, in the Carbondale-Marion area, just 28.9% of persons 25 and older have a bachelor’s degree or higher, compared to 35.0% of all Americans in the same age range.

Second on the list of the poorest cities in Illinois is East St. Louis

East St. Louis has a long history of being considered the “worst area” of the city. Even in the last decade, there has been a decrease in population of 32%, bringing the total number to barely 18,000. The current crime rates are among the highest ever recorded; occasionally they even set new records.

Considered as a poor city in Illinois is Harvey!

From 1960 to 1980, Harvey changed drastically as the percentage of African Americans increased from 7% to 66%. The transition resulted in racial tension at Thornton Township High School and in 1969’s race riots. Harvey lost its industrial and commercial backbone simultaneously.

The closure of Dixie Square became emblematic of the city’s worsening social issues. Many homeowners with HUD loans were unable to make mortgage payments, resulting in the abandonment of their homes. Harvey’s crime, unemployment, and poverty rates were among the highest in the suburbs. The city strove to improve its status as a residential community and rebuild its industrial sites.

The community of Sauk Village is incredibly compact, multicultural, and endowed with little resources.

Many locals would rather send their children to Wagoner school for their early education than any of the following grade schools or middle schools because of the inconsistent quality of instruction provided by the public schools.

Concerns regarding the lack of adequate safety measures have also been raised during the previous decade. Many people avoid talking with one another, taking part in community activities, and staying in Sauk Village because of the high volume of criminal activity.

There is a never-ending cycle of fresh people arriving, remaining for one to two years, and then departing once they become aware of the situation. Even though there are a few youth-oriented community programs, this place is not very kid- or family-friendly overall.

The travel time is fairly quick, and it won’t take you more than five to ten minutes to reach any location in Sauk Village.

Fifth on the list of the poorest cities in Illinois is the mysterious Cahokia.

By the year 1350, the city of Cahokia had been mostly deserted, and the reason why people departed the city is one of the most perplexing puzzles in North American archaeology. Now, there are some scientists who are suggesting that one popular interpretation, which states that Cahokia committed ecocide by destroying its ecosystem, and so destroyed itself, can be dismissed out of hand.

Despite its progressive upcomings, Urbana is considered a poor city of Illinois.

Urbana is well-known for its excellent Urbana Tiger spirit and the progressive, high-achieving educational system that is housed within Urbana School District 116. For the fourth time, the Urbana Free Library has been given a ranking that places it in the top one percent of all public libraries in the United States, both in the state of Illinois and on the national level.

Seventh on the list of the poorest cities in Macomb!

Macomb experienced a growth in population as a direct result of the construction of the Northern Cross Railroad through the town in the year 1855. This was the forerunner of the Chicago, Burlington and Quincy Railroad. Several former Presidents of the United States have made trips to Macomb over the years. President Ulysses S. Grant, President Andrew Johnson, and President Rutherford B.

Danville, a poor city in Illinois,  is located in the middle of Vermilion River country, and is home to a variety of museums, shops brimming with unusual and unique items, a rich history that includes multiple Abraham Lincoln historic sites, and a profusion of parks and wildlife.

Another poor city in Illinois is Charleston. Charleston’s public art and performing arts venues are well-known. The majority of the city’s nine murals are located downtown. They show historical events such as Lincoln’s final train voyage to Charleston and the Charleston Riot of 1864.

Last on the list as the poorest city in Illinois is Kankakee!

Kankakee is a city and the county seat (1853) of Kankakee County in northeastern Illinois, United States. It is on the Kankakee River, approximately 100 kilometers (60 miles) south of Chicago. Potawatomi Indians were the area’s earliest residents, and the city’s name is derived from a variation of pronunciation of their word for the river.

The area was first settled in 1832, and Kankakee was created in 1853, when the builders of the Illinois Central Railroad bypassed the French Canadian town of Bourbonnais (now an adjacent community) and selected it as a stop. The local economy relied heavily on quarrying, and the city evolved into an industrial and railroad hub.

And that concludes the top 10 poorest cities in Illinois! Which do you think should also be on the list?

Disclaimer: All data are further expounded from Stacker’s “Cities in Illinois with the most living in Poverty” article.

Hmmm. Four of the poorest cities are university communities. Carbondale, Urbana, Macomb snd Charleston. That may be skewing the statistics of percentage of population with bachelors degrees.

How about Robbins ILLINOIS horrible place

There are more cities worse off. Hidalgo or Rose Hill. ECT. Not just big cities. A lot have been over looked.

Cairo, IL in Alexander county should be number 1. That city has lacked resources for decades.

Carbondale!?? Are you kidding? Where is Cairo? Thought that would at least be in the top three

Sauk Village also has clean water issues. A Friend of mine lives there and if you run the Faucet at first clear but not a minute later is is brown as coffee. Those people should’ve even receive a water bill in those conditions…. But they still do

I know Cairo should be #1, it’s a whole lot worse than Carbondale.

I call BS on the list. You have four college towns on here. There is plenty of good paying jobs at the universities.

Charleston? I don’t think so.How about Cairo? Wasn’t on the list.

What about Ford Heights?

I agree that’s the poorest suburb that I know of

What a bogus article. It begins by trashing a couple of communities based on statistics (a valid basis) but then the author gets lazy and writes only about the wonderful things about the communities they are criticizing with zero statistics included. Then the article concludes with a summary obviously pulled from a completely different article on a different topic (jobs). Sloppy. Lazy. Wrong. This is by someone peddling negativity that contributes nothing positive to the world. Stay silent if you’re too lazy to say it accurately and without value.

I completely agree, what a sloppy article.

So what you’re saying is that because of white supremacy you control all wealth and because of minorities, blacks, it is poor and not industrial. Whites made it that way

We know that education is key and withheld from race